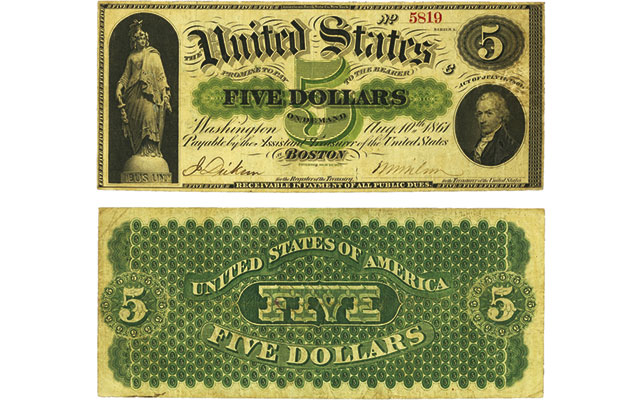 This 1861 demand note is an example of the first notes produced by the federal government using green ink on the back as an early security measure.

Friends and relatives who know that I write about paper money for Coin World often ask me questions about the notes they find in their wallets.

One question I’ve often heard goes like this: “Why is the back of U.S. paper money printed with green ink? Can’t the government find another color to use?” That’s the origin of this Readers Ask column.

The short answer is that originally the choice of green ink was for its benefits as a security device, the Bureau of Engraving and Printing states.

The use of green ink was an anti-counterfeiting measure used to prevent photographic knockoffs, since the contemporary cameras could only take pictures in black and white.

Counterfeiters figured out easy ways to remove other colored inks used on notes at that time, without disturbing the black ink. Then they would photograph the notes to produce plates they could use to make copies that could be overprinted with an imitation of the colored ink.

However, the problem was solved when a particular patented form of ink, presumably green, was developed with resistance to erasure without disturbing the black ink, impeding the schemes of counterfeiters. Notes that were tinted green, presumably with this patented ink, were produced under contract for the federal government by the company holding the patent rights to the ink, according to the BEP.

“Greenbacks” was the nickname the public placed on 1861 demand notes because of the use of green ink on the back design. These notes were the earliest paper money issued by the federal government for circulation.

When small-size notes were first introduced in 1929, the BEP continued using green ink because it was readily available in bulk and showed high resistance to chemical and physical changes. But possibly the strongest reason was that the public psychologically identified the color green with the strong and stable credit of the government.

Even though the United States has been issuing more colorful designs, the predominately green backs remain on $1 and $2 Federal Reserve notes. And the Treasury Department has said repeatedly it does not anticipate any design changes for these two denominations.