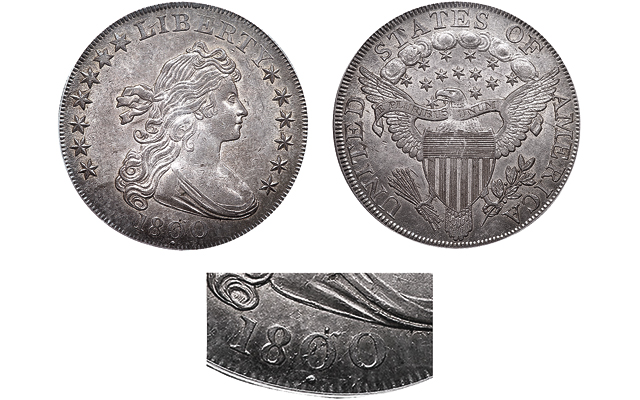 The 1800, Draped Bust, Dotted Date dollar earned its moniker primarily from the die breaks within and around the first 0 in the date.

The sale, by Ira & Larry Goldberg Auctioneers, is being conducted at the auction firm’s galleries at 11400 W. Olympic Blvd., Suite 800.

For complete information on the sale, visit the online auction catalog.

While the 1896-S is perceived by some quarter dollar collectors to  be the least challenging of the “Big Three” Barber quarter issues to acquire — 1896-S, 1901-S and 1913-S — that perception holds true only for circulated pieces, according to the auction catalogers.

The 1913-S coin, according to the auction catalogers, “was known to be a low-mintage issue from the start, and as a result, collectors from the burgeoning numismatic population of the early 20th century saved numerous examples.

“By contrast, the 1896-S slipped unnoticed into circulation, and it was not until much later that the issue was recognized as a condition rarity.”

The variety receives its moniker from the series of dotlike die breaks inside and above the first 0 in the date. Dotlike breaks are also visible in other areas of the obverse, specifically between the L and I of LIBERTY, under the nose, before the chin, below the first star, and under stars 6 and 7.

“We theorize the steel used to make this obverse die must have been substandard, yet from the production numbers, it must have been able to withstand the constant pounding to strike these large pieces of silver,” according to the auction catalogers.

The 1800 Draped Bust dollar has a reported mintage of 220,920 coins combined for all varieties.

The coin’s gold fineness of 887 THOUS. is inscribed on the ribbon above the eagle’s head on the obverse. 50 as the denomination appears ar the center of the target reverse, with 50 D C representing the denomination below the eagle.

The $50 gold slugs were used in large transactions during the early years of California’s statehood. California became a state on  Sept. 9, 1850.

Citizens favored the gold pieces, rejecting paper money that had been made illegal in the state under the 1850 California Constitution.

The octagonal $50 slugs were last made in 1852, after which the U.S. Assay Office in San Francisco, was closed. Despite the closure, the gold slugs continued to be accepted in commerce. Some found their way into the melting pots of the various federal Mints for eventual recoining into federal coinage.

According to the auction catalogers: “Generally speaking, all varieties of the U.S. Assay Office fifty dollar octagonal coins are very scarce; however, the Reeded Edge varieties are somewhat more obtainable than their earlier Lettered Edge counterparts.”