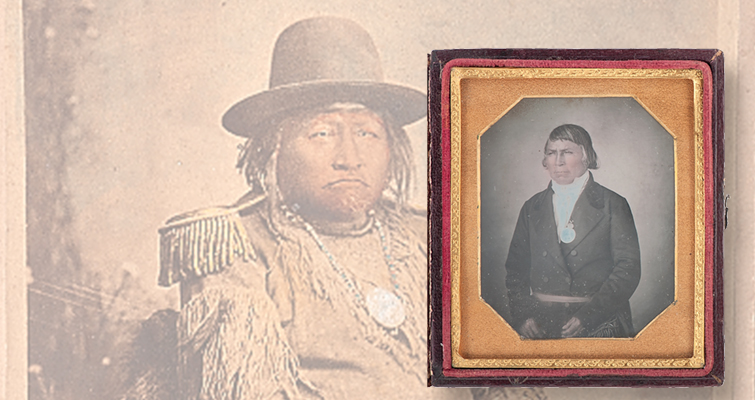 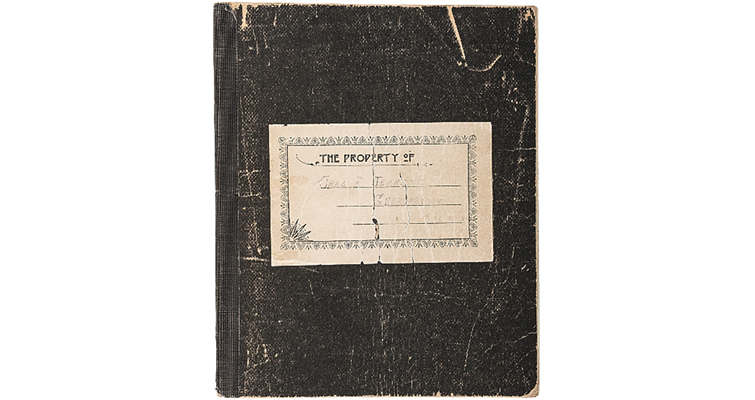 A handwritten manuscript documenting stories of the California Gold Rush, likely written around the 1900, sold for $900 on Sept. 8 in Cincinnati. 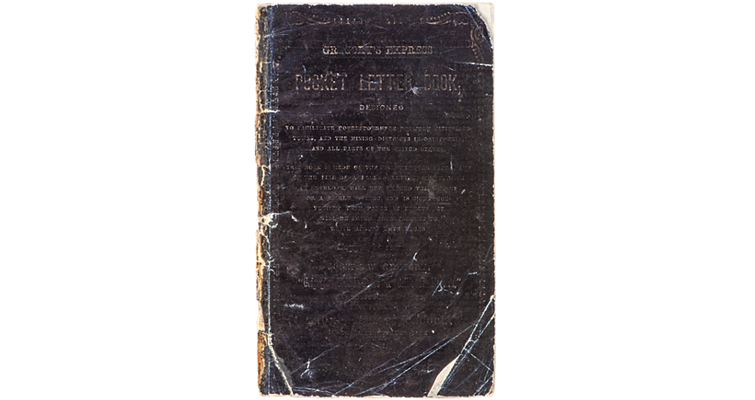 A pocket letter book was a popular item for individuals who wanted to record their experiences, as in this one from 1853 sent to a Gold Rush miner’s mother. 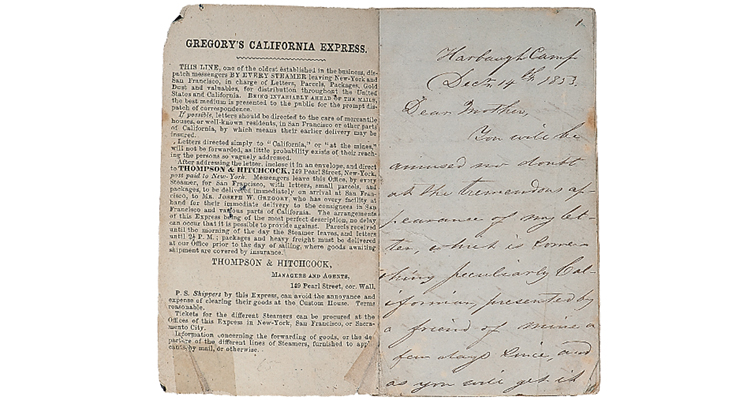 The internal pages of the California Gold Rush pocket letter book from 1853 feature a miner’s commentary to his mother about his past loves and future business plans. It sold for $720. 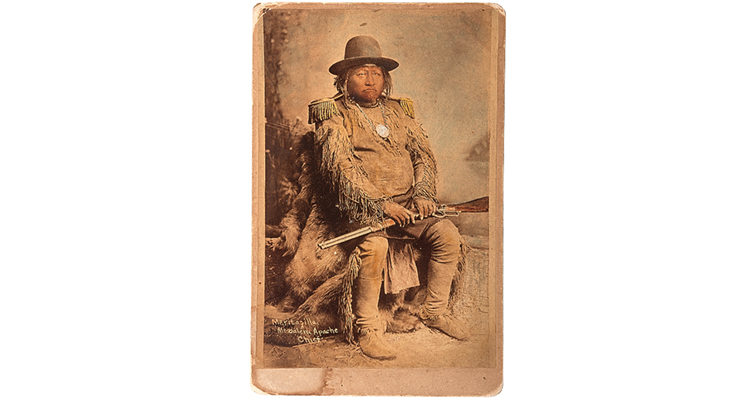 A cabinet card depicting Nautzili, Mescalero Apache chief, wearing a fringed jacket with epaulets, along with leggings, flat-brimmed hat, and an Indian peace medal around his neck, and holding a Winchester rifle, sold for $360. 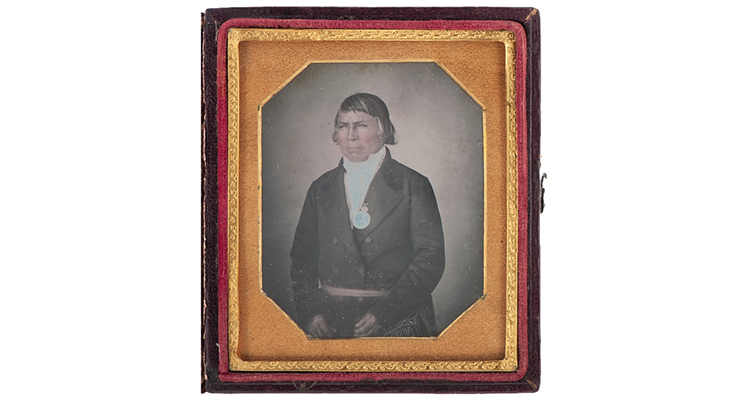 The sixth plate daguerreotype, an early type of photograph that developed in the mid-19th century, depicts an unidentified American Indian elder wearing an Indian peace medal.

Letters and documents recording individual experiences during the Gold Rush were featured as Cowan’s Auctions in Cincinnati offered selections from the collection of Eric C. Caren on Sept. 8.

Caren has been selling his collections across a series of auctions over the past few years. Katie Horstman, Cowan’s director of American History, praised the collector’s diverse interest, “He loves everything, whether it’s a six-figure copy of the Declaration of Independence or a $50 imprint.”

Did you buy a winner or loser a from the U.S. Mint? Also in this week’s print issue of Coin World, we not only learn more about rare coins, but collectible rare cars as well.

Caren wrote in his introduction that the collecting area of paper Americana is flourishing as high-end rare book collectors discover the market, explaining, “The reason is simple: even the rarest books can be found in multiples on the net on any day of the week. This material, by its ephemeral nature, is much rarer, and in my opinion, infinitely more fascinating.”

His Gold Rush-era lots included a notebook containing handwritten accounts of the California Gold rush, likely recorded during the late 19th or early 20th century by Charles E. Jerrett, a probable descendant of Daniel Jerrett, a grocer from Georgetown, California, and an original 49’er. The city was founded on Aug. 7, 1849, near the northern end of the “Mother Lode” and was a hub of activity for those seeking to earn riches in the Gold Rush.

The writings are organized as a series of stories, each focused on specific miners who may have been otherwise overlooked by history. The notebook’s opening states: “The history of the leading characters of the days of 49 have been written, and the names of Marshall and Sutter are known throughout the world. But of the rank and file of Miners, of these who made the real history of the state we have but little record. So I am going to give a brief record of the doings of such men as Poor Old Lousy Bill and Mountain Tim who underwent the dangers of the overland trail, or the longer water routes, and whose lives were spent sometimes in the unsuccessful attempt to draw a future from our rich-creased hills.”

The catalog entry adds that the author is a natural storyteller, using lively and engaging prose and that “The characters he presents are unique and seemingly as legendary as the Gold Rush itself.”

Among these characters is John Hogg, “a native of Tennessee who braved all the perils of a trip across the plains in 1849 to search for that elusive, metal, gold. ... Strike it today, spend it tomorrow was his motto, and it was so interwoven with the fiber of the man, that it existed to the last.” Hogg and his partner discovered a large gold nugget valued at $1,470, and then spent it, having a good time for months until the money was spent on hotel and bar tabs. The fascinating document sold for $900.

A 20-page California Gold Rush pocket letter book with entries written by a son to his mother in December 1853, with the son expressing his concern over a lost love, reminds readers today that the Gold Rush was populated with people with lives beyond gold. Books such as this one, a Gregory’s Express Pocket Letter Book produced in San Francisco by Thompson & Hitchcock in 1851, were sold to miners as small, pocket-sized journals that they could fill out and send to loved ones back home — wherever home was. This one was expressly, “Designed to Facilitate Correspondence between the Cities and Towns and Mining Districts in California, and All Parts of United States.”

The book, accompanied by a transcription, sold for $720.

Two 19th century photographs showing Native Americans wearing Indian peace medals were offered. The more expensive of the two was a sixth plate daguerreotype, an early type of photograph that developed in the mid-19th century, depicting an American Indian elder wearing an Indian peace medal. Sixth plate daguerrotypes measure 2¾ by 3¼ inches, the most popular sized plate since it was easy to slip out of a pocket and hold in one’s hand. While the sitter has yet to be identified, he has a serious expression and wears an Anglo-style shirt and jacket, along with his sash and peace medal. The daguerreotype with light flesh-colored tinting, in its contemporary floral pressed paper case, sold for $3,000.

A cabinet card depicting Nautzili, Mescalero Apache chief, wearing a fringed jacket and leggings, flat-brimmed hat, epaulets, holding a Winchester rifle with an Indian peace medal around his neck, sold for $360. Though the identification of the sitter that is written on the negative — Meritazilla, Mescalera Apache Chief — is found in no Apache histories, Cowan’s believes that the image was likely taken by A. Frank Randall circa 1886. Albumen cabinet cards were popular in the last quarter of the 19th century as developments in printing made them affordable, and images of Native Americans were especially popular. Like in the daguerreotype, the exact type of Indian peace medal worn is unclear. 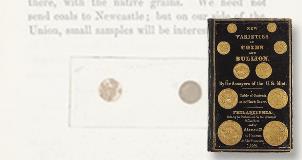 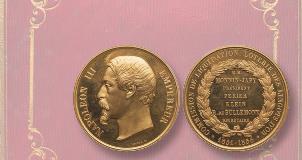 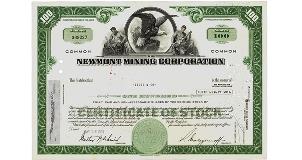