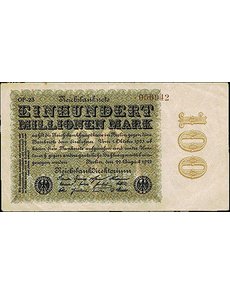 For almost a century, German inflationary money of the early 1920s has been a staple of dealer junk boxes and an object to ponder.

What would the world be like if the post World War I inflation had never happened? Would Hitler, whose Nazi movement grew from the financial chaos, have lived and died in obscurity? Would World War II never have happened?

When you hold a German inflationary bill, you’re holding history in your hands.

In the engraved swirls of the designs, the incredibly large denominations — up to 100 trillion marks — and the occasional old heavy Germanic black letter printing, you can feel the misery of a nation’s populace caught up in an economic catastrophe of such proportion that bricks of bills were used as building blocks by children.

In the recently released The Downfall of Money: Germany’s Hyperinflation and the Destruction of the Middle Class, author Frederick Taylor traces the ills of German currency from the start of World War I in 1914 to the end of 1923, when a new currency was established, resetting the mark at its prewar value of 4.2 marks to the dollar.

While the book deals mainly with the policies and politics of the Weimar Republic, it includes several vignettes about life in a society where prices changed several times a day and where — in the end — the preferred payment was food.

In November of 1923, toward the end of the inflationary period, Taylor quotes a woman who bought a packet of clothes dye worth about 15 pfennigs before the war.

“He [the clerk] makes calculations on a paper bag. … At last he looks up and says, ‘375 millions.’ I recover my breath and turn out my market basket, in which million mark scheins (notes) are done up in bales.”

According to Taylor, she noted, food “is the most stable form of circulating medium. I can pay my library subscriptions in rice or dried plums, and my dentist’s bill in condensed milk. Eggs, too are greedily accepted.”

In November 1923, the exchange rate for new currency — rentenmarks — was set at 1 trillion inflationary marks to 1 new mark.

“And one thing,” Taylor writes, “with the establishment of a 1-trillion paper mark to one Rentenmark value, Germany’s post-war domestic debt — founded overwhelmingly on all those virtuous citizens who had bought war bonds in the hope of a small regular reward (interest) for their patriotism — was reduced from 154 billion marks in November 1918 to exactly 15.4 pfennigs in November 1923.”

At the end of the inflationary period, all of those bonds together were worth less than a nickel.