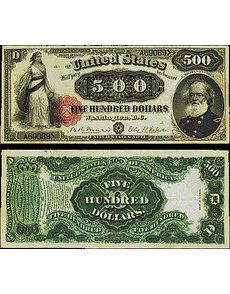 This Series 1880 $500 United States note is one of only five known: four are in government collections. This note is the only one that can be offered for sale.

Paper money will start the new year off with a bang — and that is good news for collectors.

Heritage Auctions will offer a number of spectacular, rarely seen notes during the Jan. 10 to 13 Florida United Numismatists convention in Orlando.

This Series 1880 $500 United States note (cataloged as Friedberg 1851 Paper Money of the United States by Arthur L. Friedberg and Ira S. Friedberg) features the facsimile signatures of Register of the Treasury

It is graded Very Fine 35 by Paper Money Guaranty.

Only five of these notes are known, and the other four are in government collections. In other words, this note is the only one that can be offered for sale.

Equally enticing to the well-heeled collector is a Series 1880 $1,000 United States note with the facsimile signatures of Register of the Treasury William Vernon and Treasurer of the United States Charles Treat (F-187k).

This note, with portraits of Christopher Columbus and New York Gov. DeWitt Clinton, is graded Extremely Fine 40 by PMG. When last sold in September 2006, it realized $517,500.

A Series 1882 $100 gold certificate with a brown seal and facsimile signatures of Bruce and James Gilfillan (F-1201), and graded Very Fine 25 by PMG, also has an interesting price history.

The appearance of rare notes such as these at auction proves that confidence in the market has returned.
Two years ago, a consignor would have been reluctant to take a chance putting these rarities on the block, but no such hesitation is witnessed today. ¦