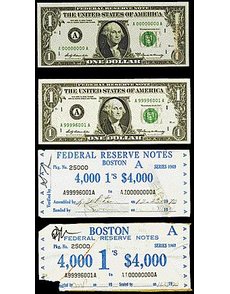 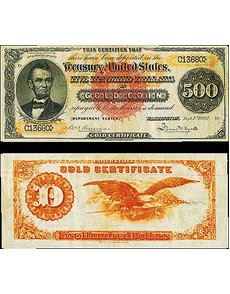 The colder than normal temperatures in Florida at the start of the Jan. 8 to 12 Florida United Numismatists show in Orlando did nothing to chill the enthusiasm of paper money collectors bidding at paper money auctions.

The $500 gold certificate, signed by Register of the Treasury William S. Rosecrans and Treasurer of the United States James W. Hyatt, is unique in collector hands. The note was graded PCGS Currency Very Fine 35. The note sold for $1,410,000 including the buyer’s fee, against an estimate of $2 million.

One other $500 gold certificate of this type exists, held in the Federal Reserve Bank Collection.

A $1,000 gold certificate appearing in the auction featured the signatures of Rosecrans and Treasurer J.N. Huston. It is one of two known in collector hands. The note in the auction, graded PCGS Currency Very Fine 35, sold for $881,250, against a $1 million pre-sale estimate.

Two other notes of the same type are known — one is in the Federal Reserve Bank Collection and the Smithsonian’s National Numismatic Collection.

A second $1,000 gold certificate in the auction, signed by Rosecrans and Treasurer Enos H. Nebeker, is one of only four known, with two of those in the Federal Reserve Bank Collection and another at an unidentified location.

The note was graded Choice Uncirculated 64 by Paper Money Guaranty and was estimated to sell for $50,000 or more.

The note was originally discovered by Tom Morrissey in 1971 and first publicly revealed at the 1973 American Numismatic Association show in Boston.

Morrissey, who died in 1977, started working for the First National Bank of Boston in 1955. While working at the bank, he frequently looked through new shipments of notes. According to the May 1974 issue of Paper Money, on Feb. 11, 1971, while looking through a “brick” of 4,000 notes for solid-number notes, Morrissey found that the Series 1969A $1 FRN with serial number A99 999 999A had been replaced with a star note, a disappointing experience. However, directly behind the replacement star note was the Series 1969A $1 FRN with serial number A00 000 000A with a vertical red ink streak near the right side of the face of the note. The red mark was an alert to printers at the Bureau of Engraving and Printing to remove the note. The practice at that time was to remove and burn notes with all zeroes in the serial number. It may be the only existing regular issue Federal Reserve note exhibiting a solid-zero serial number.

Included with the note are the inside and outside package labels that accompanied the “brick” to indicate the serial number range of the 4,000 $1 FRNs enclosed; the first note from the “brick,” with serial number A99996001A and graded Very Choice New; and other related memorabilia.