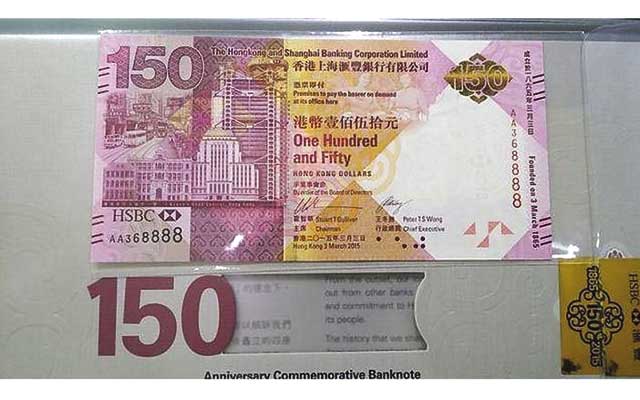 Fancy serial numbers are being forged on Hong Kong’s new commemorative $150 notes and being offered for sale.

The oft-heard theorem that the first counterfeit is not more than a few days older than the money it replicates was proven once again in Hong Kong in June.

The new $150 bank note featured in Coin World last month seems to be making news for all the wrong reasons, the latest being a process called “banknote mounting.”

The Hong Kong Standard reported in its July 3 issue that forgers are using this technique, described as similar to picture mounting, to turn pedestrian notes into ones with fancy serial numbers.

When the commemorative $150 notes were first issued by the Hong Kong and Shangai Banking Corp., buyers were given the opportunity to bid at auction for notes with attractive and lucky numbers, which in China would include the number 8. Some creative soul decided he would become extremely lucky if he could somehow increase the population of such notes, so he went to work, delicately cutting numbers off one note and somewhat indelicately pasting them on another. He probably should have taken more care since under careful examination the old numbers could still be seen underneath.

However, a bank note dealer named Chow from just across the border in Shenzhen said that his was the real one. He knew that was so because he went to Hong Kong on the first day of issue and spent HK$500,000 ($64,500) on a whole box of the notes. When he unpacked it, lo and behold, there it was — number AA368888! He first tried to sell it for HK$28,888, later lowered his price to HK$18,888, but still had no bid. He claimed “the fake ones flowing into the market will have a bad influence on sales.” He said he knew his was real after examining it under a magnifying glass and ultraviolet light.

A stamp dealer in the Kowloon section of Hong Kong said he had been offered seven of the notes with the fancy numbers, but he could tell that they had all been “mounted.” The asking price was first HK$12,000 for the lot, but then was lowered to HK$9,000.