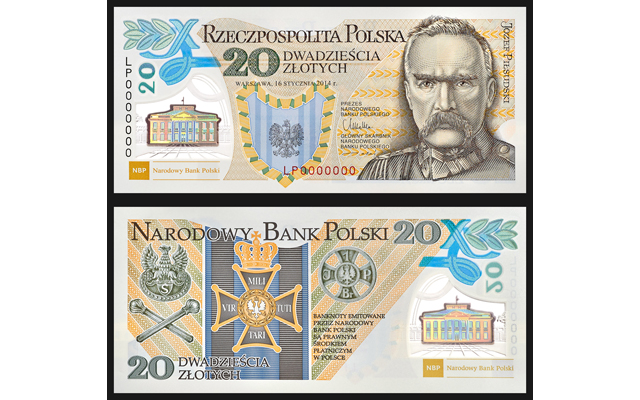 The new commemorative 20-zloty note was released into circulation Aug. 5, 2014. Both face and back are shown. This is the first polymer note issued by the National Bank of Poland.

The centenary of the formation of the Polish Legions is honored on new 20-zloty commemorative notes released into circulation Aug. 5, 2014.

The notes are the first to be printed on polymer, according to the National Bank of Poland. Up to 50,000 notes will be issued.

The face of the note features a portrait of Marshal Jozef Klemens Pilsudski wearing his military uniform.

Pilsudski was a Polish statesman and independence activist who viewed Russia as the main obstacle to Polish independence.

The back of the notes show depictions of the many Polish military awards. The notes also feature a hologram depicting Belvedere Palace, which can be seen on both sides of the notes.