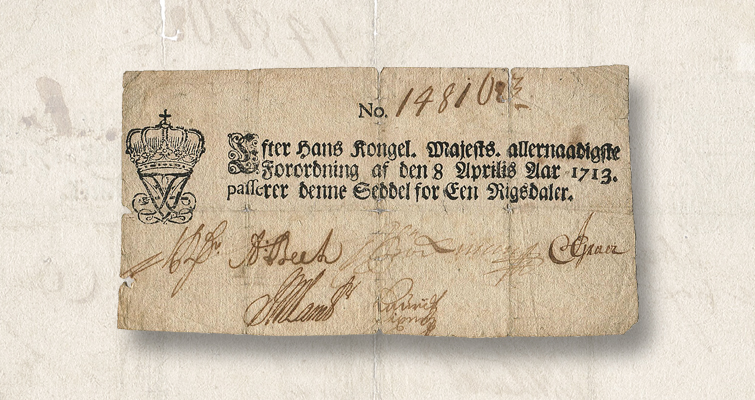 An example of the first bank note in Danish history sold for 170,000 kroner, about $27,800, on May 3 at a sale conducted by the auction house Bruun Rasmussen in Copenhagen.

An example of the first bank note in Danish history sold for 170,000 kroner, about $27,800, on May 3 at a sale conducted by the auction house Bruun Rasmussen in Copenhagen.

The rare note, described by the cataloger as in Very Good condition, was estimated at 60,000 to 80,000 kroner.

The 1-rigsdaler note of 1713 has the handwritten serial number 148163, with five signatures and the value both printed and handwritten. It was described as having “small holes in the paper by folds and a few tears in the margin, but as a whole a very good copy with clear signatures — presumably unique in private ownership and of greatest monetary historical significance.”

The issue of the note, as is common with so much early paper money, was a result of wartime necessity during the Great Northern War from 1700 to 1721. Before, Denmark only used gold and silver coins. The conflict was between a coalition of Denmark (including Norway), Russia and the Electorate of Saxony (and after 1715 also Prussia and Hanover) on one side and Sweden on the other. To cover expenses, King Frederick IV directed the issue of paper money authorized and guaranteed by the state.

The French money he emulated, the livre Tournois, issued from 1701 to 1720, did not retain their value, and when France’s Banque Royale collapsed in 1720, its notes became worthless. 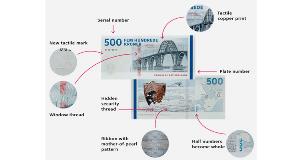 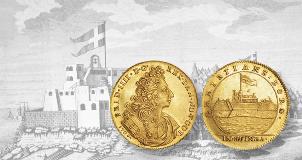 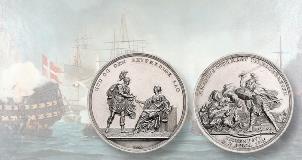