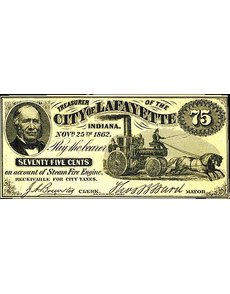 This 1862 city of Lafayette, Ind., scrip note states they were payable to the bearer on account of steam fire engine. Two horses pulling a steam pumper serve to illustrate the scrip note. These notes were receivable for paying city taxes, which apparently financed the purchase of fire fighting equipment like that illustrated on the scrip note.

One of the things that new collectors of obsolete notes quickly learn is that “You can’t collect everything!”

The field is simply too broad and, increasingly, becoming too expensive to take the scatter gun approach. My advice has always been to narrow your field of interest, wait a few days, and then narrow it some more.

For example, my primary collecting area is the obsolete notes and scrip of the state of Ohio. I started the state when I moved there in 1993. At first, I wisely limited my scope to issues from the State Bank of Ohio, a mammoth 41-branch institution that issued lots of different designs and denominations.

But then, well, you know how it happens; there were all of these other neat notes with stories of their own to tell. Unfortunately, I discovered after writing the state catalog, which ballooned to over 1,000 pages, that this was probably a (big) mistake.

One way to do-what-I-say rather than do-what-I-did is to collect topically. We’ve talked about this before, but topical collecting is the way to go — just pick a theme.

Since there is no catalog on topical collecting per se, you can also avoid excessively rare notes trying to chase “completion,” a sometimes elusive goal.

One of the neat areas to collect is, believe it or not, bank notes issued by fire insurance companies and notes that feature fire equipment. Not a lot of different examples exist, but enough to put together a neat little collection.

One of my favorites is scrip issued by the city of Lafayette, Ind., in late 1862. The notes state that they are “payable to the bearer on account of steam fire engine” and were “receivable for city taxes.”

Just to emphasize the point, a steam pumper pulled by two horses is shown thundering off to a fire. The same vignette appears on each of the six denominations which range from 5 cents to 75 cents.

I cannot conclusively prove, but have good reason to believe, that the portrait that also appears on each note is that of the mayor, Thomas B. Ward, who served as mayor from 1861 to 1865.

So browse some catalogs or online listings to see what will fit your topic. Along the way, perhaps you’ll find something else that interests you and learn some things as well!