Paper Money On the Block column 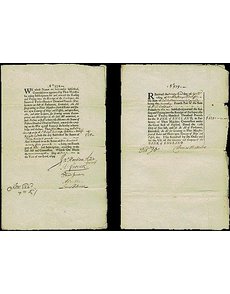 One of the documents is dated June 1694, when the government was “raising funds to create the bank.” The second is “dated September 1694, just after the bank had been formed, for the second payment of £125,” according to the lot description.

The very rare documents were graded by the firm as Very Fine and were among the 800 lots offered in the Nov. 28 sale conducted at the London office of Spink.

The documents are for the subscription of £500 made by Sir Ralph Radcliffe for his wife. The subscription provided funding for the Bank of England to get under way.

For more information about this auction or upcoming auctions at Spink, visit www.spink.com. ¦