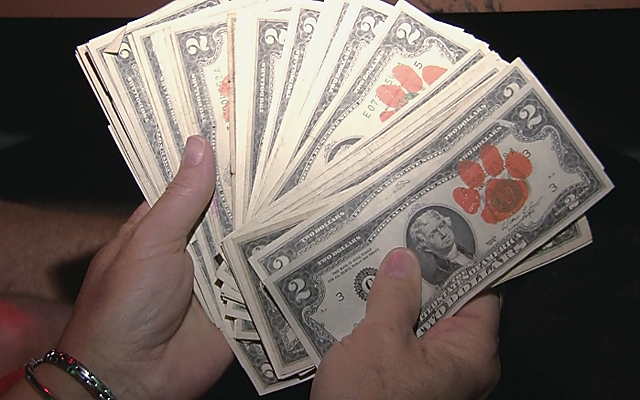 A tradition started in 1977 continues today to show how much fans of the Clemson University Tiger's football team spend at away games. The $2 FRNs are stamped with an orange tiger paw or two and used liberally by fans. 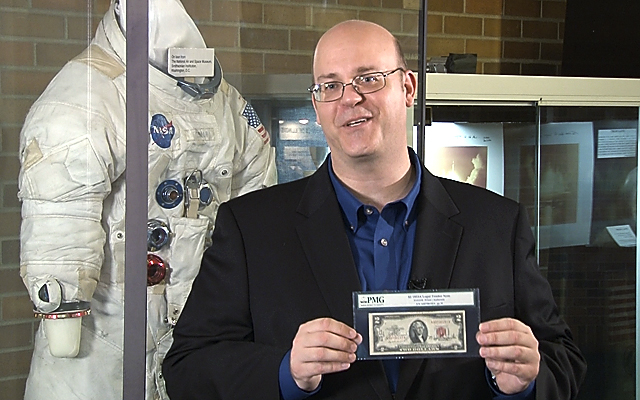 Richard Jurek, a collector of $2 FRNs and founder of the online jeffersonspacemuseum.com, which documents $2 FRNs that have flown in space, explains his passion for $2 notes in the documentary. 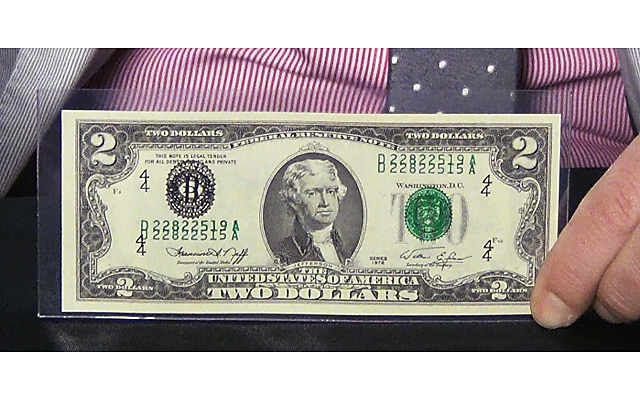 Paper money dealer Fred Bart explains the allure of this $2 FRN with a double overprint. He described the rare note as the "sexiest error ever made" and within the $25,000 range when available. 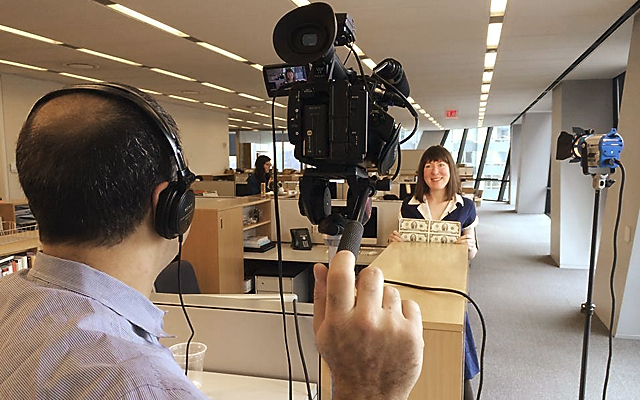 Among the people Bennardo interviewed is Heather McCabe, a self-proclaimed ambassador of the $2 note. McCabe writes about her experiences of using $2 FRNs at her blog Two Buckaroo.

What is it that makes the $2 Federal Reserve note so fascinating to collectors and noncollectors alike?

He’s currently in the editing stage of a film on the subject and hopes it will be ready for a Nov. 1, 2014, release.

Bennardo said he plans to make DVDs available for sale and is looking at schedules of upcoming film festivals to enter his film. He is also planning for an eBook for the iPad.

More than a year ago, Bennardo was looking at nearly a dozen $2 FRNs he keeps in a desk drawer. He thought to himself that “there’s something” about these notes. That’s when he decided to make his Two Dollar Bill documentary.

“It’s my journey to understand the power of the $2 bill,” Bennardo said. “It’s the forgotten son of paper currency.”

Since asking himself the question, he has filmed many interviews on the topic of people’s fascination with or loathing of the $2 FRNs.

One of the latest interviews he’s conducted included officials at the Bureau of Engraving and Printing’s Fort Worth, Texas, facility.

He said he was able to film “hours of footage — it was amazing. We had access to every stage of production,” he said.

He said he raised money to begin the project on Kickstarter, an online crowd funding website. He raised $18,489, eclipsing his goal of $18,200.

In his Kickstarter explanation of the film, he writes that most people have come in contact with $2 FRNs and “believe them to be unique collector’s items, so they save them. The thinking is that they’re extremely rare, that they’re good luck, or that they’re more valuable than they actually are.”

“When cashiers get them, there’s always a reaction. When special interest groups want to draw attention to themselves, they’ll start a campaign to spend them,” he writes. “Basically they’re treated as anything but the normal pieces of paper currency that they are.”

The U.S. federal government has produced the $2 denomination since the 1860s, beginning with $2 legal tender (United States) notes featuring a portrait of Alexander Hamilton for the first issues. Other types of large- and small-size $2 notes have featured portraits of other individuals.

But once production of small-size Federal Reserve notes began with Series 1976 notes, a portrait of Thomas Jefferson has “owned” the face of all $2 notes. Since then the Jefferson portrait has been paired with a scene from John Trumbull’s painting, The Singing of the Declaration of Independence.

To obtain more information about the documentary, visit www.2dollarbillmovie.com.