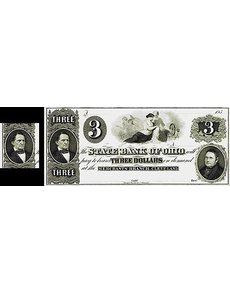 The portrait on the left side of the $3 note from the State Bank of Ohio is that of Judge Jacob Burnet, who served on the Ohio Supreme Court from 1821 through 1828.

The managers of the State Bank of Ohio embarked on a major redesign of all of the bank’s notes in 1850. They decided to feature the portraits of famous Ohioans, men whom most common people in the state would recognize.

Fast forward to the 21st century, none of these once-famous Ohioans were any longer recognizable to collectors of obsolete paper money. Only extensive searches of long forgotten correspondence and records in the state archives in Columbus finally reconnected names with the images of the once well known.

Judge Jacob Burnet. Ever heard of him? Neither had I before 2003. Judge Burnet was selected to appear on the $3 denomination along with another Ohio jurist, Ebenezer Lane.

As noted in my book on Ohio paper money, A History of Nineteenth Century Ohio Obsolete Bank Notes and Scrip, “Jacob Burnet was born in Newark, New Jersey on February 22, 1770, and graduated with honors from Nassau Hall, Princeton in 1791. He was admitted to the bar in 1796 and moved to Cincinnati, where his father had made significant investments. Burnet was appointed to the First Legislative Council (an interim form of pre-statehood government for Ohio) by President John Adams in 1798.

“He was married to Rebecca Wallace on January 2, 1800, and had eleven children, five of whom survived him. Jacob Burnet remained an active member of the Council until the organization of state government in the course of 1802-1803.

“Judge Burnet felt that the statehood movement was premature and retired from politics to focus on the legal profession for a period of nearly ten years, before serving in the state legislature from 1812-1816.

“Burnet retired from his law practice in 1817 and then served as the first President of the Cincinnati Branch of the (Second) Bank of the United States from 1817 until approximately 1820. In 1821 he was appointed by the Governor to be a Judge on the bench of the Ohio Supreme Court, which seat he held until 1828.

“In 1828, he was elected to the United States Senate to fill a vacancy occasioned by the resignation of General William H. Harrison. It was understood that he would not stand for re-election and upon the expiration of his term in 1833, he again retired to private life until his death on May 10, 1853, at the age of eighty-three.”

Jacob was not the only famous Burnet; his half brother David served as the first (interim) president of the Republic of Texas!

So next time you see a portrait on one of your notes, do a little research and see what you can uncover. You might be surprised!