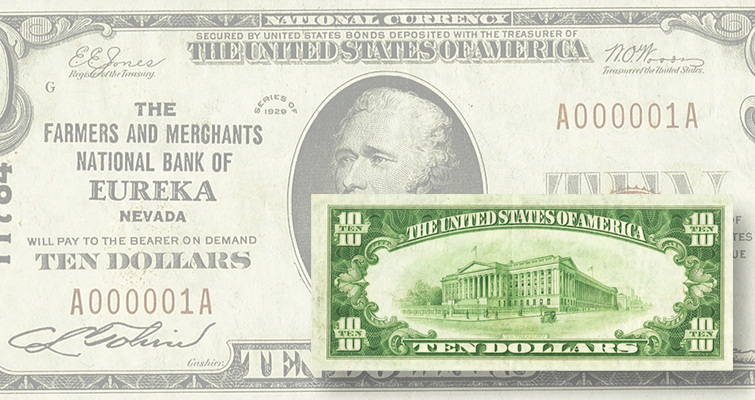 The fall paper money auction season is underway, with a number of important sales set through Thanksgiving by multiple firms. 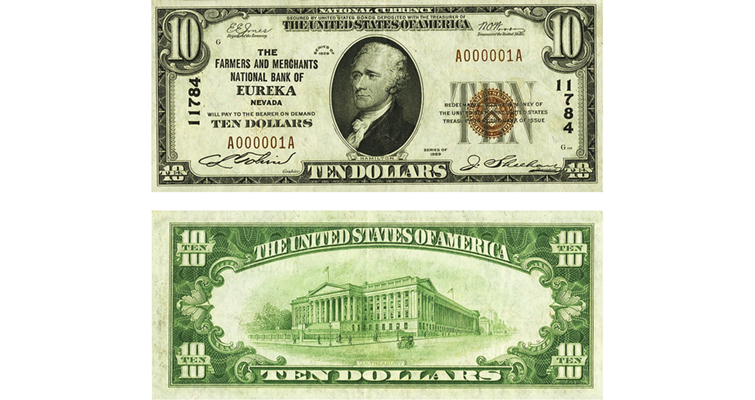 A highlight of the September Heritage auction includes a Series 1929 $10 Type 1 note from The Farmers and Merchants National Bank of Eureka in Nevada. It sold for $51,700. 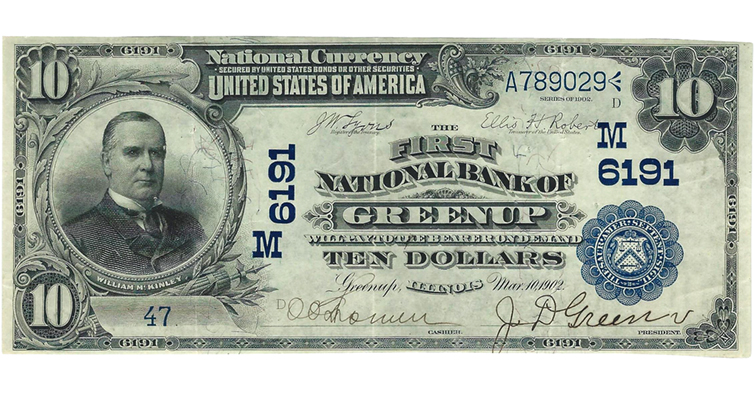 The fall paper money season includes a sale by Manifest Auctions in South Carolina, with a number of fresh national bank notes like this note from Greenup, Ill.

Where has all the paper gone? At least a half a dozen sales with United States paper money are scheduled from September to Thanksgiving, so for a lot of it, the answer is, the auction block.

The auction also was the kickoff for what is a fall festival for Nevada national bank notes and their collectors. Nevada nationals are considered among the rarest, and it is not unusual for a collector to spend years in a futile search for a single note. The state had only 16 issuing banks in 13 communities, and fewer than 1,300 notes are known in total. Eighteen notes were presented in Long Beach from eight different cities. The most anticipated was a Series 1929 $10 Type 1 note (Friedberg 1801-1) from The Farmers and Merchants National Bank of Eureka, charter number 11784, with serial number 1. Graded by PCGS Currency as About New 50, it sold for $51,700 on an estimate of $35,000 to $55,000. Other notes in the auction were from banks in Tonopah, Ely, East Ely, Elko, McGill, Winnemuca, Lovelock, and Reno.

On Oct. 3, Holabird’s Western Americana Collections is offering 58 more nationals from Nevada, in some cases duplicating, and then exceeding the Heritage offering. This auction will break from the recent norm in one important way. Only one of the notes is third-party graded. They all come from a single old Nevada collection.

After being off the market for several decades, the only known $500 three-year interest-bearing note of Aug. 15, 1864 (F-212b), graded by Paper Money Guaranty as Very Fine 25 Net, could break all records when it is offered by Stack’ Bowers Galleries in Baltimore on Nov. 5 to 8. Two other rarities, a $50 1869 “Rainbow Note” in PMG VF-30, and an important new discovery, the sixth known $5 demand note of 1861 from Cincinnati (Fr. 4) graded PMG Fine 15 Net, should both draw strong five-figure bids.

Finally, the highlight of the Lyn Knight sale at the Professional Currency Dealers Association convention in Rosemont, Ill., from Nov. 18 to 22 will bring us back to Nevada, for what is perhaps that state’s numismatic holy grail. Until now, no notes were known from the First National Bank of Rhyolite. The appearance of one, a Series 1902 Date Back $10 note with the Vernon-Treat signatures, has taken even experienced Nevada collectors by surprise.