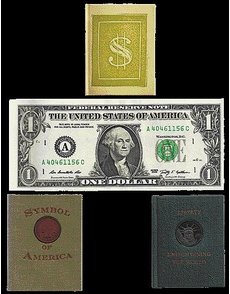 Some miniature books on numismatics offer “extra” items like a coin, a medal or shredded paper currency. The three books are shown proportional to a Federal Reserve note.

Among the handful of such tiny tomes published in the United States, three stand out as special because they not only are about numismatics, but also contain “extras” relating to money. One has “old” paper money bound in; another boasts a medal affixed to its front cover; still another — perhaps the ultimate in numismatic “extras” — has both an American coin and “paper money paper” as integral components.

James Lamar Weygand, in Money to Burn, tackles the question: “Where does old paper money go to die?” He discovers that from 1866 to 1943, 30 to 40 companies used macerated currency to manufacture novelty items, including, oddly enough, costumes for dancers. Published in 1972 at Press of the Indiana Kid for Maestro Books, only 100 copies of this 24-page, a little bit more than 2.5-inch-tall, volume were produced. Bound in following its final page is a handmade envelope containing “shredded paper money residue.” Money to Burn is the only miniature numismatic book with a fold-out, but its content is more prosaic than typical fold-outs: it reproduces a 1906 ad for a wallet made from macerated paper money.

If you prefer your numismatic extras unshredded, Lionel Austone’s Liberty Enlightening the World may be just the ticket for you. Published by the Gold Stein Press in 1986, the year that the Statue of Liberty reopened after a two-year renovation, this little (nearly 2.75 inches tall, 33 pages) volume nonetheless recounts the statue’s history, complete with Emma Lazarus’ celebrated poem, “The New Colossus.”

Information provided within reveals that 142 copies were printed, 100 of them with a .999 silver “medallion” (actually, a medal) of Liberty Enlightening the World affixed to the front cover, and 42 with the “medallion” plated in 22-karat gold. This small (less than 1-inch in diameter) medal, reminiscent of the 1986-W Statue of Liberty gold $5 obverse, was the work of “R.C.,” who is not credited beyond the initials on the medal.

The most numismatic of the miniature numismatic books, however, is Joy Goforth’s Symbol of America: An American Indian Liberty. Not only about coins (the story of James Longacre’s designing the Indian cent), it has a genuine Indian cent, obverse up, affixed to the front cover.

More than even that, its pages are, in a manner of speaking, actually money. According to the author: “This book was printed on Crane’s bank note currency paper, used for the first time in a book.”

The endpaper designs are taken from Longacre’s patterns for coinage, and one of the book’s illustrations is a portrait of Sarah Longacre, the purported model for her father’s personification of liberty on the cent.

In order to contain these features, Symbol of Liberty is the tallest of all American miniature numismatic books, a “whopping” 2.75 inches high! Published in Dallas by the Somesuch Press in 1986, its run totaled 275 copies.

The numismatic “extras” in these volumes don’t inflate their prices; even Symbol of Liberty, when available, will cost no more than $150 to add to your collection.