Expert advice on collecting paper money and other items 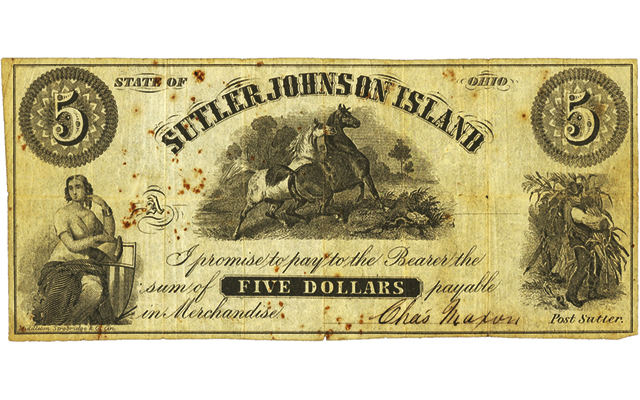 This $5 piece of sutler scrip from the Wolka Collection was issued by Charles Maxon, Johnson Island camp sutler, sold for $4,993.75. The uniface note is considered unique, but reprints of a $1 denomination are known, according to the Heritage Auctions catalog.

Someone with 50 years of collecting experience is someone most collectors would enjoy meeting. Well-known writer, researcher and speaker Wendell Wolka has been collecting paper for more than 50 years. And what specific paper notes does he collect? The better question might be what he has yet to collect.

Wolka says he actively collects large denomination, high-tech and generally “pretty” world bank notes made of polymer; modern issues of the Bank of Canada; alterations and other spurious obsolete notes (particularly with ties to Indiana); New Orleans 1861 to 1862 scrip notes; “trophy” obsolete notes from Ohio, Indiana and Illinois; and specific notes issued by the Confederate States of America.

He recently consigned his collection of Ohio obsolete notes to Heritage Auctions to be sold over the next few months. Most of Wolka’s Ohio collection was sold at the Central States Numismatic Society — either at the Heritage floor auction April 23 or Heritage’s online auction on April 28 — realized $370,424.62, which includes the buyer’s fee.

Here’s part of his account of the CSNS sale.

CW: You chose not to be physically present when the auction took place but you did peek at the action few times on the Live Heritage website. What was that like to watch?

WW: “It was pretty wild. I could only take so much and then had to take a break. Remember, I die watching Purdue basketball on TV [Wolka is a Purdue alumnus], so this reaction was nothing new to Linda [Wolka’s wife]. I kind of ‘willed’ the numbers to go up on each lot and just as easily became convinced that nothing else would sell when there was the occasional lot that did not attract attention.”

CW: Where there any surprises in what a note sold for or didn’t sell for in the sale?

CW: So what’s your focus as these “little ones” leave the nest, so to speak? Tearful? Jubilant? Satisfied? Other?

WW: “Well, I’ve sold major collections before — Indiana obsoletes, Indiana nationals, French and French Colonial notes, and Canadian Chartered Bank notes. I was sad to see each go, but understood that a person with limited financial resources has to do it this way.

“The Ohio notes which I was privileged to be the caretaker of for over two decades form perhaps the largest private collection of that state’s notes since the Schingoethe’s [the legendary late collectors Herb and Martha] collection. Now it will be someone else’s turn to make sure that these fragile artifacts are passed on to future generations.”

CW: What’s next on the horizon for you?

WW: “I’m finishing a new state catalog on Indiana obsolete issues and expect to get back to collecting notes from that state again now that Ohio is in my ‘rear view mirror.’ Never look back, always look to the next challenge! It’s been a fun 20 years, now it’s time to start working on the next great collection!”