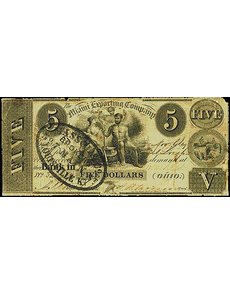 The note was issued by Miami Exporting Co. in 1839. The Cincinnati bank had originally been chartered in 1803, ceased active operation in 1822, remained dormant until 1834 and then sputtered back to life until it failed once and for all on Jan. 10, 1842.

Obsolete notes are sometimes found with rubber-stamped notices from various bankers, brokers and other entities. Some collectors consider these stamps as a bad thing but I find them to be enhancements to the character of the note.

These stamps often indicated that a note was worthless (witness numerous counterfeit and spurious notes sporting a huge COUNTERFEIT stamp from the Suffolk Bank or the Bank of Mutual Redemption in Boston, who acted as the “policemen” for detecting such notes in New England).

While those are quite interesting, I’ve always found the local stamps of brokers even more interesting. The business of these exchange brokers was to make a market in various notes whose worth often hinged on their assessment of the health of the issuers. A stamped note usually indicated that the note was at least not worthless for the time being — a stamp of approval, so to speak, by the exchange broker.

The note shown above was issued by a resuscitated Miami Exporting Co. in 1839. The Cincinnati bank, which had originally been chartered in 1803, ceased active operation in 1822, remained dormant until 1834 and then sputtered back to life until it failed once and for all on Jan. 10, 1842. The failure resulted in a riot the next day that saw its offices sacked by an unruly street mob. Records and more than $220,000 in worthless notes were thrown into the street. To provide an idea of the bank’s ability to redeem its circulation at the time of its failure, only $1,261 in specie was found in the safe during the riot.

But back to happier times. The note is stamped by Massol & Co., Brokers, No. 7 Main St., Louisville, Ky. From an 1838 to 1839 Louisville city directory, it appears that the firm of F. A. Massol & Co. was in business as a “lottery and exchange broker.” The principal’s name was Florian A. Massol, a young man only 20 or 21 years old. By 1850, Massol had moved to New York where he was apparently part of a merchant partnership. In 1853, he had again moved, this time to Sacramento, Calif., where he was listed in the census as a “hardware merchant.” I finally lost track of Massol in 1883 when he was listed as living in Los Gatos, Calif. Perhaps more than you ever wanted to know, but we at least have been able to add a number of bricks to the ever growing “Wall of Knowledge.”