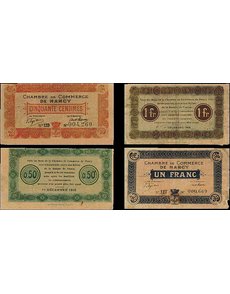 Enclosed are copies of two pieces of French currency that I have not been able to find any information about, so I am hoping you can help me.

Your color copies are of the face and back of 1-franc and 50-centime emergency notes issued by the Chamber of Commerce of Nancy, France.

This town is located in the northeastern part of the country in the Lorraine region, about an hour and a half north of Paris by train.

French emergency notes of this kind and era were first issued by the Chamber of Commerce of Paris in August 1914, at the start of World War I.

At the time, the French government had suspended the use of gold coins. French citizens were hoarding their gold and silver coins and thus merchants couldn’t make change for their customers.

The Chamber of Commerce in Paris requested permission from the government to authorize small bearer bonds in of 5- and 25-centime and 1- and 2-franc denominations, according to the website www.frenchbanknotes.com. The small notes “would be legal tender among the Paris merchants that agreed to accept them.” The Paris Chamber of Commerce placed an equivalent amount of cash in the Banque de France to cover the notes.

Soon, other chambers around the country were seeking permission to use the same system in their towns.

According to Dave Mills, who owns the website www.frenchbanknotes.com, the definitive catalog, Les Billets des Chambres de Commerce, by Jean Pirot, shows 13 notes issued just in 1918 in Nancy. The catalog is printed in French and is available from some online booksellers.

Mills said all the notes are watermarked with images of bees, representing hard work.

In Uncirculated condition these notes “are priced between $12 and $50, lower of course in lesser condition. None are particularly rare of course, as shown by the pricing,” Mills said.

Emergency money is not known only to France. German notgeld issued in Germany after World War I may be the best known. But other European countries also issued items like this to help with the shortage of small change during and after the war.

During the 1930s in America, many privately produced emergency paper scrip notes were distributed by cities in an effort to stimulate the economy.