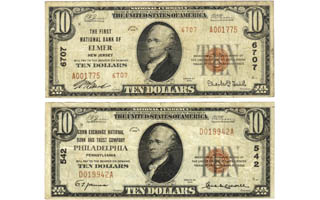 National bank notes are popular as they offer collectors numerous ways in which to pursue building and personalizing a collection.

A collection of higher grade, small-size $5 bills from towns named Lincoln is visually appealing, and for those blessed with diligence and deeper pockets, collecting an example from each of the first 100 banks that were awarded charters remains a challenging pursuit.

Regardless of which collecting path you choose, for most new entrants into this segment of the hobby, a collection of national bank notes usually starts by acquiring an example issued by a local, hometown bank.

If you are lucky, maybe several banks in your area issued their own currency but what does a collector do who lives in small, rural, one-bank town? Depending on when the bank was chartered, collectors could pursue notes of varying series or designs. However, after they have exhausted all of the available avenues from that one bank, what is the next step toward building a national bank note collection?

The natural and logical progression is to then begin seeking out examples of notes from neighboring towns, then expanding to an entire county or even an entire state. However, collectors could explore some alternate ways to expand their collection by adding nonlocal notes that have both a direct and indirect connection to their one-bank town.

At first glance, the notes, when juxtaposed, will appear to have nothing in common. However, the collector would be able to weave the histories of multiple banks together in a way that could make for an award-winning display at the next local coin and paper money show.

Maybe the one bank in your town was merged into a larger, successor organization long ago, or maybe it became a serial acquirer that steadily grew over the years, swallowing a number of smaller “legacy” banks along the way. In either scenario, this could add a new angle to your national bank note collection.

For example, after a collector in a one-bank town like Hershey, Pa., acquires a Hershey national bank note, he or she could then look to add “sister notes” of other banks such as Yardville National Bank (Yardville, N.J.) and Riggs National Bank (Washington, D.C.) that were also acquired by PNC over the years.

If you enjoy peeling onions or playing with matryoshka dolls, separating the onion or dolls layer by layer, try assembling a collection of bank notes from all of the national currency issuing banks that now comprise Bank of America.

From personal knowledge, I can tell you that you would need a note from the Cumberland National Bank of Bridgeton (New Jersey), which became part of Bank of America through a series of acquisitions. Recreating this ancestry of banks that bought banks would make for an impressive-looking display.

Another collecting angle, albeit more obscure, would be to add the note of a correspondent bank. Most small town banks needed a larger bank, generally located in a more urban location, to help facilitate transactions on its behalf.

To this day, many smaller institutions still utilize a correspondent for certain types of transactions.

How would a collector find out this tidbit of information? Many small banks publish commemorative booklets on their centennials (or other major milestones), which often offer collectors a treasure trove of background information and interesting anecdotes.

These books can usually be purchased for a reasonable price and can be a valuable reference when researching a bank.

As I own a small-size note from Elmer, I acquired a small-size Corn Exchange note as a way to complement it. This makes for a bit of trivia as the two notes, when placed side by side, have no obvious connection.

Legacy and correspondent banks are just a couple of different ways to consider acquiring national bank notes and may appeal to collectors from one-bank towns who enjoy the thrill of the hunt and doing research.

The methods of forming a collection of national bank notes are as wide open as your imagination. In fact, the only wrong way to assemble a collection is one where you are not enjoying yourself while doing it.