Education focus of many world notes 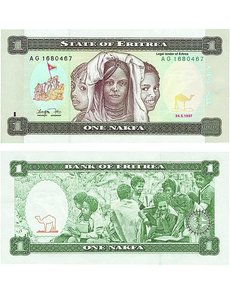 The portraits of three children are depicted on the face of this 1-nakfa note of Eritrea. The back design shows an outdoor school scene with more children.

Topical collecting is a natural and popular method for bringing newcomers into the paper money field. Notes depicting classroom scenes will appeal to all kinds of students of the hobby no matter their age.

Such vignettes haven’t been placed on North American issues yet, but a number of moderately priced notes from around the world allow the studious to build a collection with an unusual theme.

On the Angola 1,000-kwanza notes from 1976, the teacher and students are shown in a thatched pole structure that is open to the elements.

Check the anti-ignorance message on the 1974 500-franc notes issued by the Central African Republic, as vignettes of a group of students and chemical testing are the dual themes featured on the back side. This note is going to be on the high end of the thrifty collector’s price range even in circulated grades. The identical vignette was also used on Cameroon’s red 500-franc notes from the late 1970s and early 1980.

The 1997 1-nafka notes from Eritrea make the point that education can be as basic or expensive as the situation dictates. Children are shown in a village school on the back, and a trio of native girls can be seen on the face. This brown and black note shouldn’t cost more than $2.

Dictatorial governments sometimes ban or attempt to micromanage education, and Greece’s 200-drachma notes issued from 1995 to 1998 provide such a history lesson.

A Greek Orthodox priest is shown instructing students in a secret school during the Ottoman (Turkish) occupation of 1458 to 1821. Since the 200-drachma notes were the lowest denomination note in the pre-euro era, it’s an affordable and attractive addition to any collection.

A classroom scene complete with blackboard was the long-running theme on Guatemala’s 5-quetzale notes. First issued in 1969, the purple notes were commonly seen in circulation into the 1990s before the design changed to show a different portrait of a grade school classroom.

The low price (at least in circulated condition) of these notes also provides collectors with a rendering of the colorful, long-tailed quetzal, the Guatemalan national bird found in densely wooded jungles.

A vignette of a female graduate, complete with western-style cap and gown, dominates the back of the Indonesia 1985 10,000-rupiah notes. The Indonesian 20,000-rupiah notes, first issued in 1998, depict a group of grade school students seated at desks.

The Kenyan 20-shilling notes of 1981 to 1987 will bring a smile to those who enjoy reading, as four village women share a newspaper on the back.

Literacy isn’t something that can be taken for granted even in the sophisticated 21st century. These notes show that acquiring basic reading and math skills can make a significant difference in a person’s earning potential in much of the world. A trio of grade school students read their lessons on the back of the Rwanda 500-franc notes of 1998. The multicolored face design features mountain gorillas and it’s a $10 or less purchase depending on condition.

If money is tight, the Lao 1-kip notes of 1979 can be obtained for next to nothing even in Crisp Uncirculated condition. The classroom scene on the back stands in stark contrast to the marching Marxist militia on the face.

Students at work share the face of Syria’s 1998 50-pound notes with such unlikely elements as a soccer stadium, a modern office building and a luscious cluster of grapes. An ancient water wheel can be found on the back of this inexpensive collectible.

First issued in 1999, Taiwan’s 1,000-yuan notes more than hold their own for eye appeal. Four students examine a globe on the face while a pair of pheasants and a mountain make up the back design. With a current face value equal to nearly $35 U.S., this won’t be a low-cost purchase, but some things are worth the price.

Standing students (no money for chairs?) are shown writing or taking notes on Zambia’s 5-kwacha notes of 1976, and a teacher provides some one-on-one instruction to a student on the 2-kwacha notes that saw extensive circulation during the 1980s.

Even with the variety of notes that carry an educational focus, some scenes have yet to appear.

Will paper money showing young mechanics working on a car or motor scooter, computer training or young interns in a hospital make the roster one day?

One thing is certain. Collectors who thoroughly educate themselves in paper money will be far better off than collectors who take a casual approach to learning. ¦