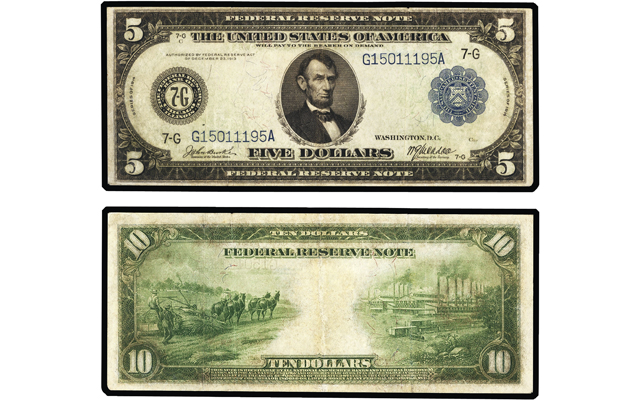 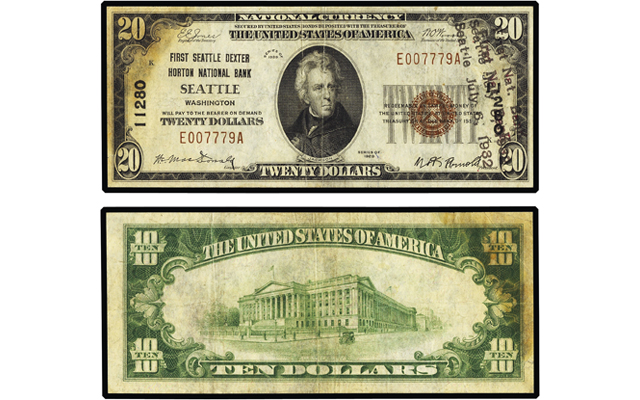 Part 3: Many different combinations
U.S. federal double-denomination notes are known in many combinations of currency types and series dates and in various denomination combinations.
The error type has been reported on large-size national bank notes more than any other category of note, in the following denominational combinations: $10/$20, $20/$10, $50/$100 and $100/$50.
In some cases, the same combinations are known for multiple banks of the same series date.
Series 1902 $10/$20 notes are known for banks in Maryland, Montana, Minnesota, Texas, North Carolina and North Dakota. That wide range of varieties is probably due to an additional printing run needed for national bank notes. All of the notes share the same face and back designs pulled from a pool of shared original sheets; bank titles were added in a separate printing step, so it is very possible that a stack of partially printed sheets of $10/$20 notes was accessed for many different banks without any of the printers noting the error as the different bank titles were added.
Also counted among large-size errors are $2/$1 1899 silver certificates and 1918 Federal Reserve Bank notes; and 1914 Federal Reserve notes in $5/$10 and $20/$10 combinations.
Combinations of small-size double-denomination are fewer: a Series 1929 $20/$10 national bank note, 1934D $5/$10 Federal Reserve notes, $10/$5 1928A FRNS, the aforementioned $20/$10 1974 notes, and a Series 1950A combination with the face of a $10 Federal Reserve note and back of a $1 silver certificate (a particularly fun combination of two denominations and two different currency types).
Keep reading this series:
Part 4: Is their production still possible today?