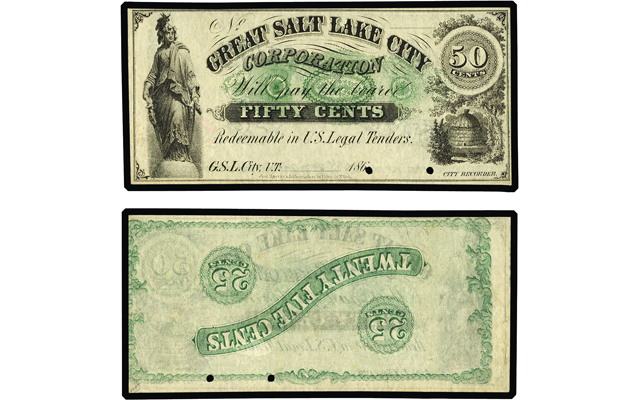 The following is the second in a series of posts on double-denomination U.S. notes.

The reason for the wider variety of large-size double-denomination notes derives at least in part from sheet configurations used in the early days of federal paper money production. While for much of its history federal paper currency was printed with a single denomination to a sheet, many early notes were printed on multi-denomination sheets, generally though not always with four notes to a sheet, arranged vertically. For example, some early national bank notes were printed with three $1 notes and one $2 note to a sheet, or three $10 notes and a single $20 note.

In these kinds of configurations, the cause of this error, while rooted in the need for multiple printing steps, differed from that for the 1974 error. After their first printing run, the sheets of these early notes were taken to the correct press for the second printing, but the sheet on which one side had been printed was placed into the press inverted.

In that situation, a sheet containing three notes of one denomination and one of another would produce two double-denomination errors at the sheet’s ends. A sheet of $1-$1-$1-$2 notes, for example, would produce a $1/$2 note and a $2/$1 note. The designs on both notes would be inverted because the sheet had been inverted, and furthermore, while the two center notes from the same sheet would have matching denominations on both sides, the designs would be inverted in relation to each other.

Amazingly, some early large-size error notes circulated for a long time. Heritage describes an example of the Original Series $10/$20 national bank note printed for the Second National Bank of Springfield realizing $11,500 in a January 2006 auction thusly: “This Good-Very Good example has some old time tape repairs on both sides and some tiny paper pulls, along with a few internal splits. ...”