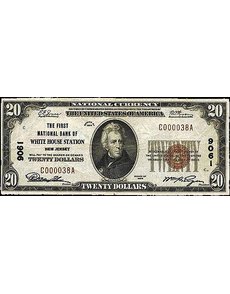 The small-size note was issued for the First National Bank of White House Station (New Jersey) and bears charter number 9061.

It is the first small-size note of this denomination from the bank to become known to collectors, according to the auction firm. It has been graded Very Fine with some minor soiling on the back. Only 300 small-size $20 notes were issued by this bank.

“The current note was found by the consignor along with other items of no consequence in an antique family desk. He had no idea of the importance or value of the note,” according to the firm, and “in fact he asked Doyle New York’s specialist, Norman R. Scrivener, if it was still worth the face value of $20.”

According to Doyle New York, “To say the least he was in shock when Scrivener suggested a conservative auction estimate of $6,000 to $8,000, with the possibility of it exceeding the higher figure.”

The bank issued only 3,756 small-size notes during a 27-month interval between 1929 and 1931, making its small-size issue among the most diminutive in New Jersey, according to the firm.

Two small-size notes appear in the census for this charter, both Series 1929 $10 notes. One of these is the only publicly sold small-size note on this bank, having been auctioned by Stack’s in its November 2006 auction, where it brought $21,850, including the buyer’s fee.

The discovery New Jersey note will be offered along with other consignments of coins, paper money and postage stamps.

The note will be available for public viewing April 20 to 23 at the firm’s offices, located at 175 E. 87th St. in Manhattan.

Lots may also be previewed online at the firm’s website www.DoyleNewYork.com.

For more information about the note, call Scrivener at 212-427-2730 or email him at norman.scrivener@DoyleNewYork.com. ¦