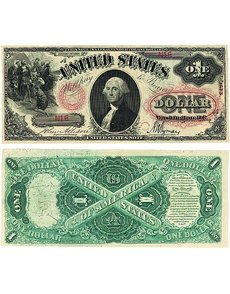 Several months ago I received an email with attachments that appeared to be the images of two notes of the United States that were previously unknown to the collector community.

The second note was a Series 1882 $5 Brown Back national bank note for the National Bank of Ashland (Nebraska), Charter No. 2921.

After consulting Track & Price, a comprehensive database containing sales and auction records for large-size U.S. paper money and national bank notes, I discovered that all F-26 notes reported up until now had seven-digit serial numbers. That convinced me that the image of the serial number N1 note was probably just a complete fabrication, created by some imaginative collector with advanced skills in Photoshop.

I also checked to see if any 1882 $5 Brown Back nationals from Charter No. 2921 were reported. There were none listed. Was that also a fabricated digital image?

I knew there was an outside chance that the notes were real, but why were these two notes together in one place when they seemed to have absolutely no relationship to each other?

I was about to hit the “Delete” button on my screen and get rid of the troublesome email with the fabricated images when my professionalism took over and stopped me from doing so.

I contacted the person who sent me the email with the images, and a few weeks and many emails later, I found myself in the owner’s office, staring at an unquestionably genuine serial number N1 Series 1875 $1 United States note.

Where has this note been for more than 125 years?

Why were these the only two notes the owner showed me, and how on earth did the two notes relate to each other.

Some of the answers were revealed as I sat and talked to the owner.

“My aunt’s two grandfathers were in banking and commerce,” the owner said. “The first one, J.B. Brown, was the president of the National Bank of Ashland, Neb. His written signature appears on the $5 Nebraska national. The other grandfather was Albert U. Wyman, who was treasurer of the United States from 1876 to 1877, and 1883 to 1885.”

The owner then showed me a letter signed by President Ulysses S. Grant, appointing Wyman treasurer of the United States.

“This note, written by President Grant, was framed, and it hung on the wall in my aunt’s house for as long as I can remember,” the owner said. “Based on the pinholes, I think the serial number 1 bank note may also have been on display on the wall.”

The owner said that her aunt told her that Wyman used to give her “something valuable every year for Christmas.”

It was now perfectly clear that these notes were genuine and that they were saved as family mementoes. This explained why they had not been seen by the collecting community for more than 137 years.

The information in the accompanying tables was compiled from Track & Price.

Series 1862 legal tender notes, depicting a portrait of Treasury Secretary Salmon P. Chase (Design 4 as cataloged in the Friedberg book), were numbered and issued from serial number 1 on up, and when the Treasury Department ran out of numbers, a new series was started, beginning with serial number 1. This explains why numerous single-, double-, and triple-digit serial numbers are reported for F-16 through F-17. Clearly, serial number 1 notes from these issues were printed as part of the regular issues. The fact that all of the reported Design 4 serial number 1 notes are very low grade indicates that perhaps no one cared enough about them to save them as souvenirs, mementoes or to use them as gifts, or for presentation purposes.

No Series 1874, 1875, 1878 or 1880 United States notes (Design 6, with a portrait of Washington but with a different back design than Design 5) with serial numbers containing fewer than five digits are recorded in Track & Price for Friedberg numbers 19 through 20, but then, beginning with Friedberg 21, something unusual happened. In the 1875 Series B $1 United States notes (F-21), two serial number A1 notes have been reported (though they may well be two appearances of the same note). One A1 note was sold in a Jan. 16, 1990, auction by Stack’s, Lot 1050; graded About Uncirculated, the note sold for $15,400. An A1 $1 note was also offered at auction by Lyn Knight Currency Auctions on Oct. 16, 2004; the note, Lot 44, was graded Crisp Uncirculated in the catalog.

None of the other F-21 notes issued have smaller than five-digit serial numbers. Clearly, the A1 F-21 note or notes were printed for some special purpose and saved.

A similar situation occurred within the F-28 series — a serial number Z1 note is reported, but no other low-number notes were issued for that series. That note, heavily circulated (graded Fine 15 by Paper Money Guaranty), brought $16,675 in a 2008 auction conducted by Ira & Larry Goldberg Coins & Collectibles. It must have been printed for some special purpose, and later found its way into circulation.

The serial number N1 F-26 $1 1875 United States note that recently appeared was apparently printed for some special purpose. It was saved, perhaps mounted and displayed, and passed down from the treasurer of the United States through his heirs, to the present owner.

At least six serial number 1 notes are listed for the Series 1917 United States notes (also Design 6), and numerous two- and three-digit serial numbers, many in higher grades, are also reported. Demand by collectors may well have caused the treasurer to print and save these Design 6 low serial numbers for special presentations or for use as gifts to friends and colleagues. (Today, the treasurer receives the first block of notes printed and distributes them as he or she pleases.)

From the brief survey outlined here, it would seem that three different classes of serial number 1 notes can be identified:

Class 1: Serial number 1 notes that were made for regular circulation purposes, as part of normal print runs.

Class 2: Serial number 1 notes that were printed for special purposes, not part of normal print runs.

Class 3: Serial number 1 notes that were printed as part of the regular print runs, then put aside for special purposes, along with other low digit notes.

Further research may turn up correspondence confirming this theory, and if a new serial number 1 note can come to light after 137 years, who knows what other discoveries await us? ¦