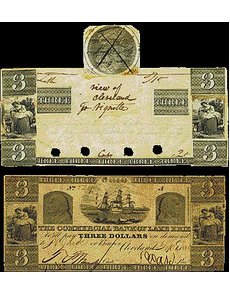 At top is a layout for a $3 obsolete note to be issued by the Commercial Bank of Lake Erie with a portrait of an individual at center top who was not under consideration. At bottom is the final design on a printed note, showing a steamship and Benjamin Franklin.

One of the first decisions an antebellum banker had to make was what the new bank’s notes were going to look like. Salesmen from the bank note printing companies had books full of stock vignettes (illustrations) that could be chosen to suit the aesthetic inclinations of the persons designated to pick the designs.

Designs often reflected the name of the bank. The Farmers Bank might, for example, select vignettes of farmers plowing or harvest scenes while the Railroad Bank would logically lean toward vignettes of locomotives, passenger trains crossing bridges and the like.

If, for some reason, President Smith wanted a portrait of Mrs. Smith to adorn his notes, this too could be done. Custom vignettes were engraved from either paintings or photographic images that were supplied by the customer and cost significantly more than standard designs.

Once the general design concept had been developed, it was the responsibility of the salesman to ensure that the customer was completely satisfied before the steel engraved plate was completed.

Sometimes this was accomplished by producing a “paste up.” Various stock “pieces and parts” were printed from existing plates and pasted onto card stock or bank note paper the size of the proposed note. This gave the banker a chance to see how everything would come together for the proposed design. Sometimes changes were made to the paste up; sometimes lots of changes.

The note shown was designed for the Commercial Bank of Lake Erie in Cleveland, Ohio. The bank opened for business in 1816 and weathered a couple of rough periods before voluntarily closing in 1842. Draper, Underwood, Bald & Spencer did the printing. Most of the design, including the borders and end vignettes, are stock pieces.

It appears a lot of discussion occurred about the central vignette. Based on the handwritten notations, a portrait of George Washington, a steamship or a custom vignette of a view of Cleveland were under consideration.

As you can tell from the second note, the steamboat design was selected for the center vignette, and twin portraits of Benjamin Franklin in the same style as the proposed portrait were used.