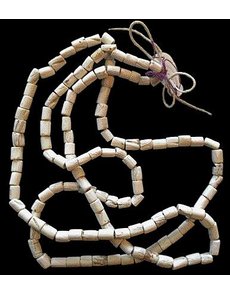 Wampum like this strand, composed of beads found near Rochester, N.Y., was legal tender throughout much of the American colonies in the 17th century.

One of the earliest lessons any child learns is how to identify shapes. Coins are round. Paper money is rectangular. Everyone knows that.

Perhaps this immutable truth is what keeps more early American coin aficionados from pursuing the currency of the early American frontier, which consisted of practically no coins at all.

In the 17th or 18th century, if you wanted to acquire furs from native tribes in places like the Great Lakes, the wilds of Pennsylvania, or New England, a bagful of shillings, ecus or coppers would have served little use.

While those cultures quickly adopted European trade practices, and learned to modify their own long-standing economic relationships to best take advantage of a massive shift in both supply of goods and demand for their natural resources, coins rarely, if ever, entered the equation. When settlers first arrived at Jamestown, they discovered that the locals had long held copper in high esteem, placing upon it an almost sacred value. It had long been imported into the area, from small mines in the South and from larger deposits near the Great Lakes.

When Englishmen arrived, they were shocked to find that a small piece of copper — a coin, a piece of a kettle, anything really — was more avidly sought than silver, even gold.

Several hundred miles north, English and Dutch settlers injected themselves into an ancient economic relationship between coastal tribes and inland ones by trafficking in beads they called wampum. Made from shells of the quahog, or clam, the tiny beads produced by tribes in places like Connecticut and Long Island had long found high demand in New England and upstate New York, where the beads were used for adornment and as a way to sanctify agreements and relationships.

Once European ideals of money showed up, wampum became a de facto currency, made legal tender throughout the Eastern Seaboard. Since the dark part of a clamshell is smaller than the white part, blue or purple beads were valued more highly than the white ones: a farthing apiece for blue in Massachusetts in 1650, two to a farthing for white.

As wampum became the victim of inflation, largely from overproduction with better quality European tools, other trade goods filled the breach, including imported glass beads, finely made silver ornaments, mouth harps, scissors, metal arrowheads, and a wide variety of other implements, both useful and ornamental.

Most had fixed values by the mid-18th century, making a circular silver brooch or a fishhook just as much currency as a Pine Tree shilling or a halfpenny.