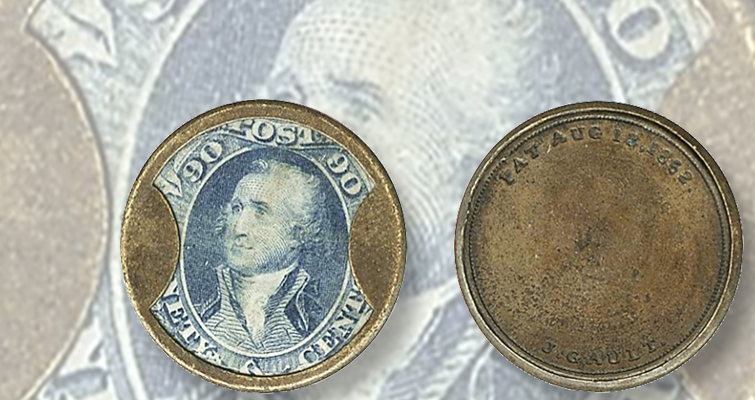 This 90-cent encased postage stamp from the Dauer Collection is unusual in that, rather than advertising another commercial enterprise or product, it advertised itself, bearing information about Gault’s patent.

Encased postage is an unusual collecting category in that it is a Civil War hybrid considered by some to be numismatic, while others deem it philatelic. It is actually both. An auction house in the latter category, Robert A. Siegel Auction Galleries Inc. of New York City, will be offering the Drs. Joanne and Edward Dauer Collection of Civil War Encased Postage in its fall 2020 auction of United States stamps.

The Dauers are well-known to the paper money collecting community. They have assembled and then sold landmark collections of United States and Australian paper money. They began collecting encased postage only in 2007, but in a short time amassed a collection both of quality and rarity — some of the rarest of the genre.

According to promotional material issued by the auction house, included in the auction are two 90-cent issues, the highest encased postage denomination, each of which could exceed $10,000 based on past sales.

The first is one of two known 90-cent issues with Burnett’s Standard Cooking Extracts of Boston advertised on the back (Friedberg EP-184a). The second is from the creator of encased postage, John Gault of Boston and New York (EP-186). This one is unusual in that, rather than advertising a commercial enterprise or product, it advertised itself. The reverse is blank except for PAT AUG 12 1862 / J. GAULT. It is estimated that from five to 10 of these are known.

Encased postage stamps owe their existence to the absence of small change during the early days of the Civil War. Stamps were one of the many attempted solutions, but they obviously deteriorated quickly and became a mess to use. Gault devised and got a patent for a round metal frame into which a stamp could be inserted and then covered with a layer of transparent mica so the value could be identified. Since the back was blank, merchants caught on to the idea of advertising on it with an embossed message for their business or a product. 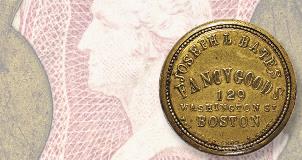 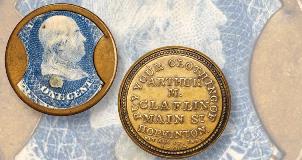