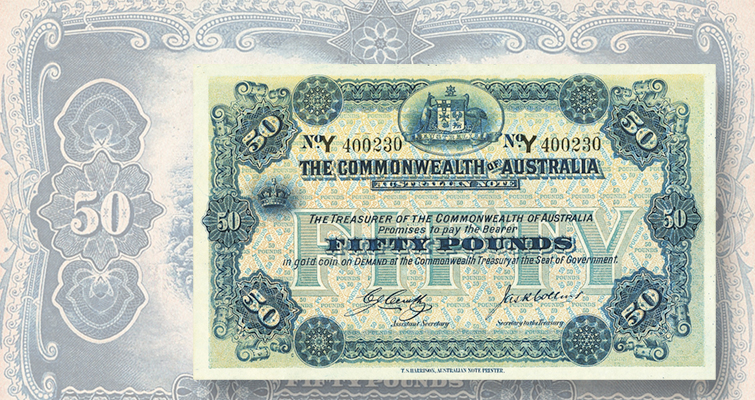 Currency of the British Commonwealth is front and center on April 24 in Dallas when Heritage Auctions offers the collection of Drs. Joanne and Edward Dauer, including this 1918 note of Australia.

Currency of the British Commonwealth is front and center on April 24 in Dallas when Heritage Auctions sells the collection of Drs. Joanne and Edward Dauer. It is being called one of the finest such collections ever assembled.

The Dauers are no strangers to paper money. Their heralded collection of United States currency formed the basis of their 400-page American History As Seen Through Currency (2003).

Twenty-three of the sale’s 197 notes are from Australia. The most spectacular, with a $40,000 upper estimate, is an undated £50 note from 1918 in Paper Money Guaranty About Uncirculated 55 quality. Nearly all of the 608,000 reported printed have been redeemed. Of the three notes Paper Money Guaranty has graded, this is the finest.

A Turks and Caicos Islands £1 note of 12.11.1918 has the same expected price and the same grade. This note was originally owned by Amon Carter. Its rarity is attributable to the fact that the population of the colony was inhabited by less than 6,000 people at the time, so the notes were issued only in small amounts until 1928 when they were replaced by currency from Jamaica.

Ranked high for being interesting and historic, if not expensive, with a relatively low $1,000 starting price, is a World War II era undated Fanning Island Plantation £1 note in PMG Very Fine 20. It is described as one of the classic World War II emergency notes. These were issued by the manager of the plantation, located 1,000 miles south of Hawaii, where they were in printed in 1942. The purpose was to alleviate a shortage of Australian dollars for the American military posted there. The island, now part of Kiribati and known as Tabuaeran, was a wartime relay point between Hawaii and Australia. Those notes not already redeemed or recycled were withdrawn in 1945.

The sale also includes a selection of Palestinian and Israeli notes, and large selections from the Bahamas, Bermuda, and British colonies in Africa. 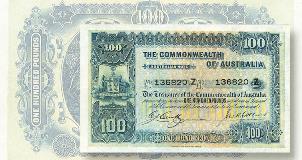 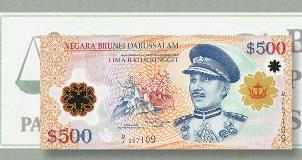 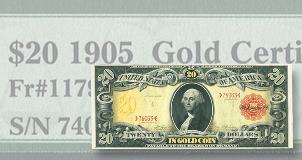