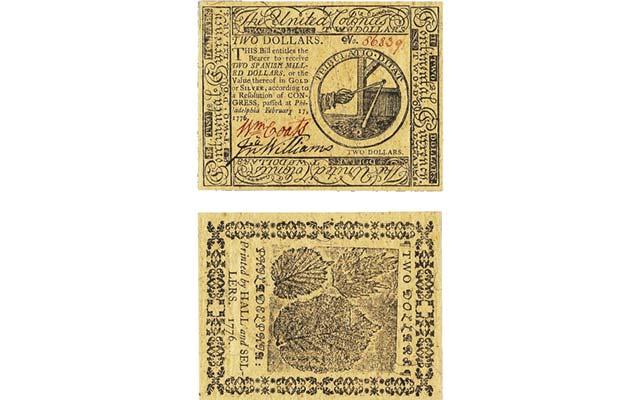 This Continental $2 note from February 17, 1776, is graded Superb Gem New 67 Premium Paper Quality by PCGS Currency. It realized $8,225 in an April 22 auction by Heritage Auctions.

Documents of the pre-federal era, particularly in the period of the American Revolution, reveal the enormous role paper money played in the lives of everyday Americans.

Its rise and fall had an enormous impact on the Framers, making 18th century paper money even more important to students of history and economics than the coins of the era. The notes are beautiful, the number of impossible rarities is far outweighed by the proportion of issues that are easy to find, and many notes are available in nearly New condition. What’s not to love?

Continental currency is, clearly, the most popular segment of this market. It makes sense that folks would enjoy collecting our first federal currency, the stuff that paid the soldiers and suppliers of the Continental Army. Its simplicity is appealing: 11 resolutions from 1775 to 1779, 23 different denominations from $1/6 to $80, 102 total notes required for a complete set. Most notes are easily acquired, and nearly all can be had in About Uncirculated or Uncirculated grades. The diversity of devices, and their connection to Benjamin Franklin, is a visual and historical feast.

What mystifies me relates to the grading and pricing structure: If a modern collector or dealer cuts single notes from a miraculously intact uncut sheet precisely enough that the notes have nice broad, square borders, they merit extraordinary numerical grades.

Such notes sell for enormous prices compared to single notes that may have been cut in the 1770s, as those examples were often trimmed less precisely and may have received — heaven forbid — some wear.

Notes from the individual colonies and states rarely bring prices close to the sums realized by these super high grade Continental notes, despite being significantly scarcer on the whole, excepting hoard issues like 1776-dated notes from Delaware and Pennsylvania or the 1786 Rhode Island issues.

Even astounding rarities from the Original Thirteen Colonies sell for less than high grade Continental notes for one simple reason: demand.

Many collectors like Continental currency. Colonial and state notes, however, tend to be sought after by specialists in one state or another, and the number of collectors who avidly pursue all the issues from some individual states could be counted on one hand.

If some of the collectors who complete their Continental currency sets would discover the fun of collecting the colonial and state paper money issues, the market could look considerably different.