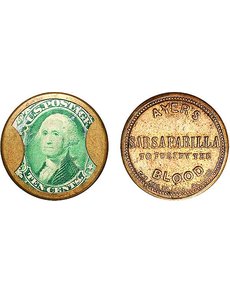 An encased postage stamp issued by J.C. Ayer from Lowell, Mass., was once a part of the extensive John J. Ford Jr. Collection. Encased postage offers collectors great variety, with each piece having its own story to tell.

Looking for something new and interesting to collect — a series in which every item has its own story? If so, here is a specialty in which most items are affordable, and there is no breathless chase for ultra-high grades. In fact, a nice Extremely Fine example is about par and very desirable.

It seems like only yesterday, but it was 22 years ago, back in 1989, that Mike Hodder and I teamed to create The Standard Catalogue of Encased Postage Stamps. This was done at the suggestion of John J. Ford Jr., who supplied much information.

John loved encased postage and hoped to write a book on the topic someday, but never did. That was the story of John’s life: lots of publishing ideas, but never time to actually create manuscripts.

Encased postage stamps harken to the summer of 1862. The Civil War was being intensely fought, and no one was sure whether the Union would come out on top or if the Confederacy would prevail.

With economic uncertainty in the air, citizens hoarded “hard money” — at first gold coins, starting in December 1861. In the spring of 1862, silver coins disappeared.

Finally, in July of that year, 1-cent pieces were gone as well. It was impossible to buy a glass of soda or beer, or a newspaper, or to get a haircut.

Filling the void, merchants and others issued paper scrip notes for use in local trade, to which tokens were added. The situation went from bad to worse, and on July 17 the government ruled that ordinary postage stamps could be used as money.

John Gault, an entrepreneur, came up with the idea of placing stamps in a brass frame, visible through a clear mica pane on the front and bearing advertisements on the back. Most stamps that he used were of lower denominations such as 1¢, 3¢, and 5¢, but higher values included 10¢, 12¢, 24¢ and 90¢.

A good place to start is with an Ayer’s encased postage stamp. There are several different varieties, each very affordable for the low denominations.