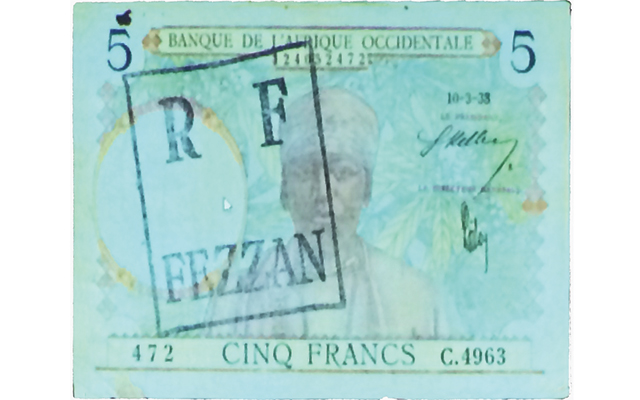 Example of a fake R.F. Fezzan overprint on a genuine 5-franc Banque de L'Afrique Occidentale (French West Africa) note. The Fezzan area is the southwestern region of Libya that was once under French control.

The title of Joe Boling’s presentation said it all: “The Fakes Outnumber the Originals.”

Boling spoke June 13 as part of the Speakers Series at the June 13 to 15 International Paper Money Show in Memphis, Tenn.

His focus was on rare world notes that began to appear on Internet auction sites a few years ago in numbers “far in excess of pieces reported from collections.”

He said there are many fake Persian overprints on German notes (the notes themselves are likely genuine) from 1914. He advises collectors interested in this area to buy a 20-power loupe to detect the clues that the different types of modern printing methods leave, which can be detected on the fake overprints.

Most of the Tibet overprints on Central Bank of China notes offered on Internet auction sites are “modern fabrications.” Some of these “notes” have misspelled words or even the wrong denominations printed in the fake overprint.

As for the fake R.F. Fezzan overprints on 5-, 25- and 100-franc Banque De, l’Afrique Occidentale (French West Africa) notes available online, “most came from the same person in England” who has been offering such items under seven different names over the past nine years.

Boling said complaints to online auction sites are often ignored. He said reports of someone using fake rubber stamps to apply the Fezzan overprints began surfacing in the 1970s.