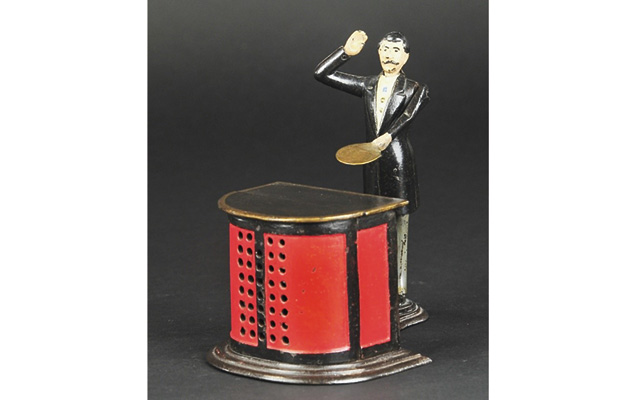 This mechanical bank design is called "Preacher in the Pulpit." A bank featuring this design sold for $252,000 in a 2014 auction.

Coin collectors, for obvious reasons, have a warm spot in their hearts for savings banks. Beyond the standard pottery piggy, some banks come in the shape of the Liberty Bell or of Indian Head 5-cent pieces. The best banks, though, are the banks that do something — mechanical banks.

They’ve got a triple attraction. Toy collectors, antique collectors and, of course, coin collectors vie for them. Like coins, prices are all over the place, from a few dollars for modern reproductions to hundreds of thousands of dollars for old, rare pieces.

Mechanical banks, mostly made from cast iron, were first produced in the 1860s and enjoyed great popularity in the late 1800s and early 1900s. By World War II the toy’s popularity had faded.

The most expensive bank, a rare variation of an 1880s Jonah and the Whale bank, in which long-suffering Jonah slides down Moby’s throat, sold for $414,000 in 2007. In numismatic terms, the hammer price is about equal to the value of a roll of 1913 Indian Head, Bison on Mound 5-cent pieces in Proof 67 (if such a thing existed).

Bertoia Auctions of Vineland, N.J., is in the middle of a two-part sale of several hundred banks.

The auction’s first session was held in November 2014; the next is March 27 to 28, 2015. The most expensive bank in the November sale was a circa 1876 Preacher in the Pulpit bank, in which an animated parson drops a coin placed in his collection plate into the bank’s base. The bank, in “Pristine” condition, fetched $252,000.

Two expensive pieces in the November sale were prototypes of banks that never reached production, the bank-collector’s equivalent of pattern coins.

One prototype, circa 1881, is called Old Aunt Dinah and the Fairy. The bank is made of painted lead, not unlike gilt bronze patterns of U.S. gold coins.

When the fairy lowers her wand, an old woman raises her hands in surprise and the tray she is holding flips over to reveal the stylized reverse of a gold $20 piece.

The Near Mint condition bank prototype sold for $72,000.