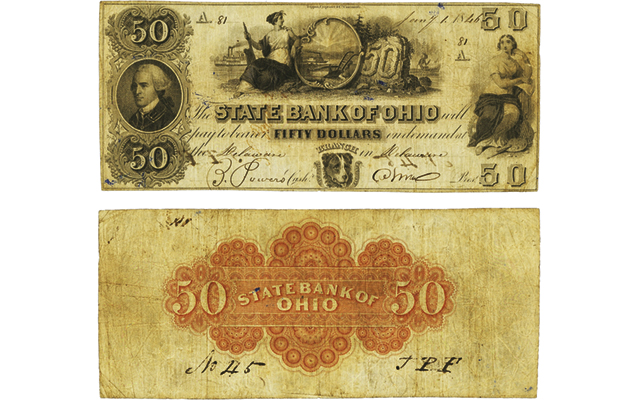 This $50 obsolete note issued by the State Bank of Ohio, Delaware County Branch, sold for $7,343.75, which includes the buyer's fee. The note, part of the Wendell Wolka Collection of Ohio obsolete notes, was sold by Heritage Auctions during the Central States Numismatic Society's annual gathering in April 2014.

If you do not come away more excited about collecting paper money after talking with Wendell Wolka, you clearing haven’t been listening.

Well-known writer, researcher and speaker Wolka has been collecting paper for more than 50 years. He writes the monthly Coin World column “Collecting Paper” and admits to having a “terminal case of collecting.”

Wolka spent nearly two decades acquiring and researching the Ohio obsolete notes, and then drew from the collection when writing his 2004 book, A History of Nineteenth Century Ohio: Obsolete Bank Notes and Scrip.

Coin World had conversations with Wolka before and after the auction, regarding his decision to sell the collection and about the background that goes into pursuing such a collection.

His insights from more than 50 years of collecting paper money can benefit anyone from a new collector to a more seasoned one.

CW: So tell me how you got started collecting the Ohio obsolete notes — was the intent always to write a book?

WW: “The short answer is: ‘Collectors collect.’ When I moved to Ohio in 1993, I got interested in the State Bank of Ohio issues and then eventually migrated to all of the other Ohio issues. The collecting instinct happened first and the book followed

CW: You had the experience of being the co-author of the Indiana obsolete book in 1978; is that what put this writing task in your head?

WW: “Writing the Indiana book, made it a lot easier to think about doing Ohio. I had an approach developed and a few ‘lessons learned’ that made doing [the] Ohio [book project] not seem too impossible a task to consider. Also technology was a lot better than the days of the electric typewriter and white out correction fluid! I must admit that the sheer magnitude of the Ohio material was a bit stunning. I didn’t think we’d end up with a book over 1,000 pages long.”