Collecting the Macabre with coins, tokens and paper money 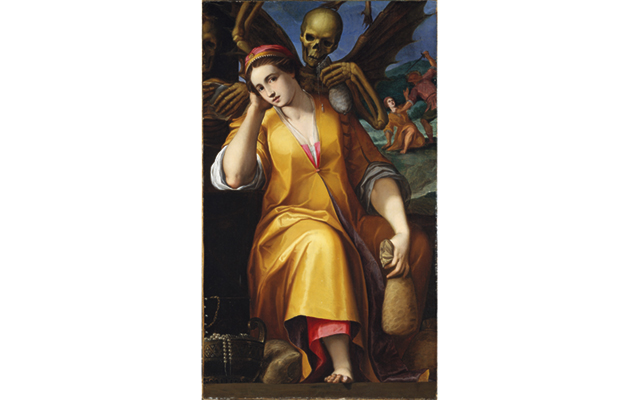 Skeletons are often used in allegories depicted in visual arts. This painting by Italian artist Jacopo Ligozzi (Florence, 1547 to 1627) depicts avarice as a pale woman holding a bag of money with a threatening skeleton behind her. Image courtesy Metropolitan Museum of Art. 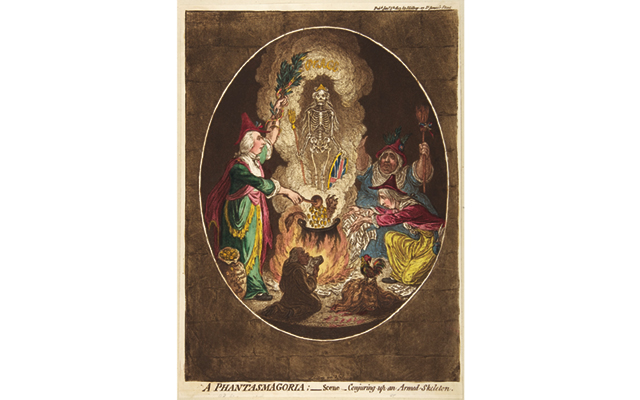 An 1803 etching by British artist James Gillray titled "A Phantasmagoria" shows a group of witches pouring coins into a cauldron to conjure up an armored skeleton. Image courtesy Metropolitan Museum of Art. 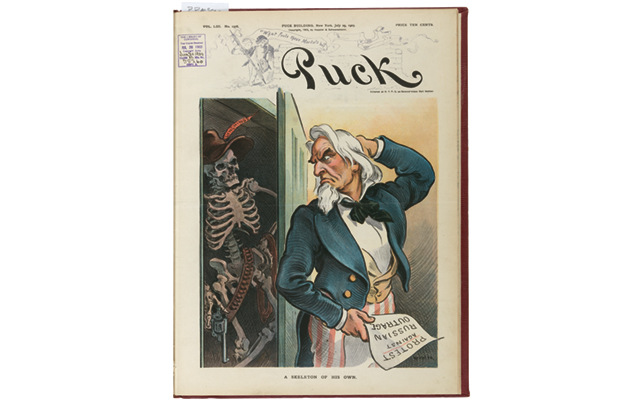 Skeletons can used in satire to represent different things. This 1903 illustration shows Uncle Sam with an armed skeleton at his back, indicating the government’s double standard on a political issue at the time. Image courtesy Library of Congress.

Artists have long used symbols of death to help articulate some of the less tangible qualities of life.

This is often referred to as the macabre, perhaps best manifested in allegorical representations of death appearing as a dancing skeleton.

The depiction — and celebration — of this admittedly creepy subject is relatively recent and traces its origins back to the late Medieval and early Renaissance era.

It’s easy to imagine why, as the Black Death provided grim reminders of mortality during the mid-14th century. It killed roughly one third to one half of Europe’s population at the time, and death became an uncomfortably familiar part of life for Europeans.

The visual representation of death helped people visualize something intangible, but something that affects us all.

Today in the United States, this sense of the creepy and spooky is best exemplified by Halloween and its varied traditions, which today use a healthy dose of humor to confront the power of death.

Collectors today have a wide range of material to select from when collecting the macabre.

A circulating coin is an object that has to represent a nation’s ideology and find acceptance in commerce to be effective. It has to appeal to a wide audience, so depictions of the most obviously macabre subjects are rarely found on officially issued money.

However, artists have for hundreds of years adapted and transformed money using artistic ingenuity. From coin carving that dramatically changes a coin’s initial design in the tradition of hobo nickel carving, to artists using pen and ink to transform paper money, the artistic tradition of using the macabre to depict universal themes continues today.

Looking behind the history of numismatic objects adds another layer to discover for collectors seeking the spooky. Many of the traditional elements of modern Halloween celebration, such as Dracula, have historical roots with strong numismatic connections.

With that, let’s take a journey through the spooky, creepy and macabre.