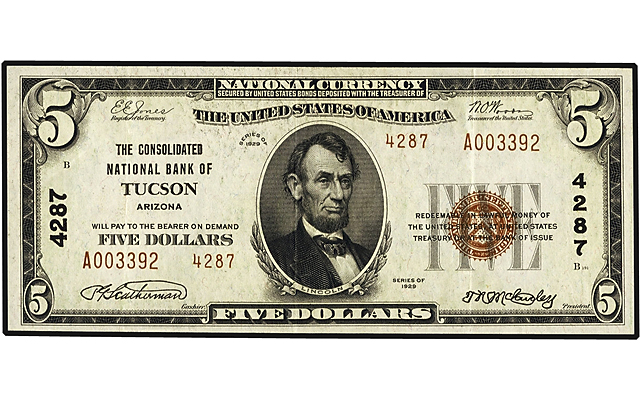 This $5 small-size note issued by the Consolidated National Bank of Tucson (Arizona), brings a touch of the old West to any collection. The note, graded Choice Extremely Fine 45 Premium Paper Quality by Paper Money Guaranty, was sold for $940 at a Sept. 4, 2014, Heritage Auctions sale. 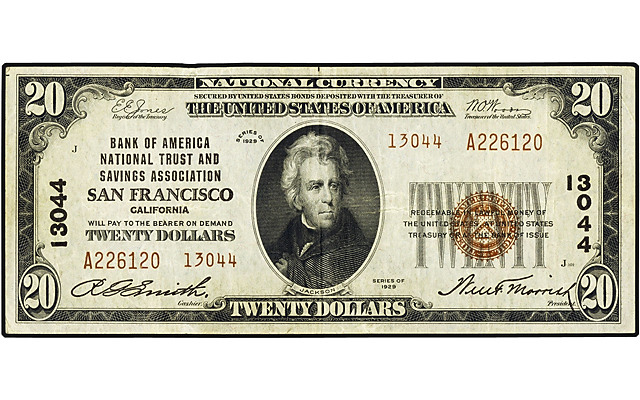 A $20 note issued by the Bank of America National Trust and Savings Association in San Francisco sold for $56 at a Sept. 9, 2014, Heritage auction. The note was graded Very Fine to Extremely Fine by the auction firm.

Editor's note: The following is the first of a three-part Coin World series about collecting national bank notes using knowledge of U.S. geography and the alphabet, prepared by Michele Orzano for the November 2014 monthly edition of Coin World.

By combining knowledge of the alphabet with a bit of geography, a collector could start on a journey to collect small-size national bank notes in a nontraditional, but no less fun, manner.

Depending on the grade/condition of the notes, no deep pockets are required for this collection. The higher the grade and denomination of the note, obviously, the more you will pay. But with this type of customizable collection you can decide what’s the most fun for you.

Some letters of the alphabet will need to be skipped at first (B, E, J, Q, X and Z), but never fear, there’s a way to incorporate those letters into a specialized sub-set on the same theme. We’ll explore that a little later.

Now let’s move on to selecting alphabetically the states that had national banks that issued small-size notes.

From the “A” list of states where national banks issued small-size notes — Alabama, Alaska, Arizona and Arkansas — I selected Arizona and a note from the Consolidated National Bank of Tucson as the first note in the “collection.”

The bank received its charter to issue large-size nationals in 1890 while Arizona was still a territory. It became a state in 1912, and by 1929 the bank was issuing small-size national bank notes.

Fun fact: Tucson has had four different national flags fly over it through the years — Spain, Mexico, Confederate States of America and the United States.

The letter “C” offers a large selection of state names, including California, Colorado, and Connecticut. California is a large state and provides a wide range of national banks.

A San Francisco bank like the Bank of America National Trust and Savings Association, would be a good choice, especially for its interesting name.

No multiple state names start with D, F or G so it is pretty simple to select one bank each from Delaware, Florida and Georgia.

The Union National Bank of Wilmington in Delaware might be a good choice. It was originally chartered as a national bank in 1885. The city is located midway between New York and Washington, D.C.

The American National Bank of Pensacola, another great bank name, would provide a good source of notes for Florida. Pensacola, home to the U.S. Air Force Blue Angels flight demonstration team, is sometimes called the City of Five Flags, as the flags of Spain, France, Great Britain, the Confederate States and the United States have flown over it.

The First National Bank of Atlanta rounds out this group of states. Atlanta is the capital of the state of Georgia. The city was established in 1837.