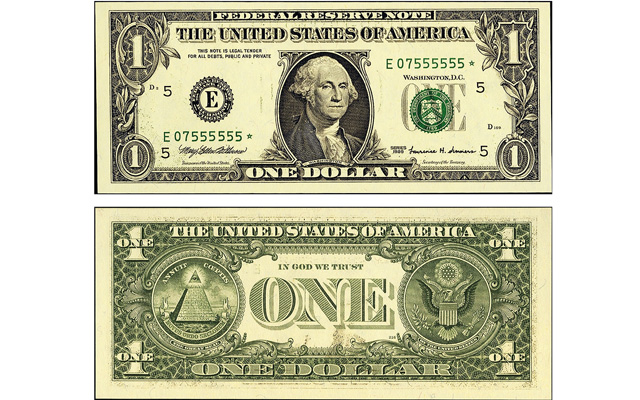 Not everyone even notices serial numbers on Federal Reserve notes, so that’s an advantage to being a collector.

Serial numbers are in two places on all Federal Reserve notes, and on a note, the same eight-digit sequence should appear in both places.

What you have falls into the category of what collectors refer to as “fancy” notes and, more specifically, it is a “repeater” note. This serial number repeats digits in pairs.

The Series 1924E $1 Federal Reserve note illustrating this column is an example of what collectors call a “fancy” serial number. It sold for $35 in an Aug. 26, 2014, Heritage Auction.

The note also happens to be a replacement or “star” note because a star symbol is in place of the letter at the end of the serial number.

Star notes are more scarce than normal notes because they are printed in smaller quantities than regular notes.

The value above face for any piece of paper money comes down to condition and rarity. Unless the note is in pristine condition, and that is doubtful if you found the note in circulation, it is probably best used as pocket money, according to Mike Abramson, who specializes in “fancy” serially numbered notes.