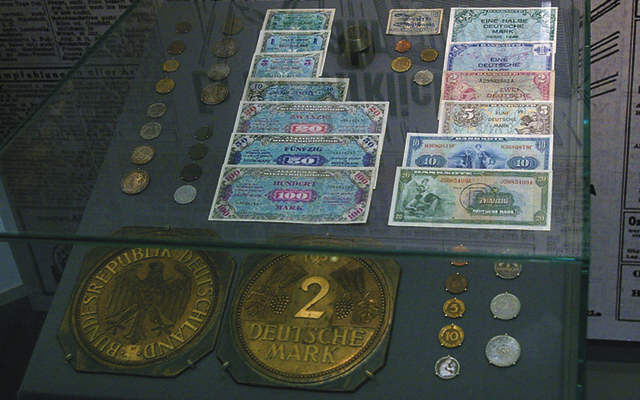 Coins and bank notes from the World War II era and the years following are among several numismatic exhibits at the Hamburg History Museum in Hamburg, Germany.

Various Nazi-era coins and medals, followed by a type set of the Allied military currency of 1944 from half- to 100-mark denominations, are on display.

Also shown are examples of West Germany’s first bank notes from 1948 by Bank Deutsche Lander, ranging from half- to 20-mark denominations, accompanied by a type set of early issued West German coins.

Hamburg is Germany’s second largest city after Berlin and lays claim to the world’s second oldest bank. The Hamburg History Museum was established at its current location in 1922. As a history museum that chronicles the birth of Hamburg to the present, it highlights the city’s role in shipping and banking.

The major numismatic exhibition is on the first floor (second level) in Das Jahrhundert der Reformation (The Century of the Reformation) wing, which leads to the Hamburg in der frühen Neuzeit (Hamburg in the Early Modern Period) area.

How to get there

The museum is at Holstenwall 24, and is easily reached either from the St. Pauli stop on the U3 U-Bahn (Yellow) line a block around the corner, or via the No. 112 bus at the Hamburgmuseum stop in front of the museum.

The museum is handicap accessible, has a cafe, book shop and library, and photography (without flash) is permitted. The English website is www.hamburgmuseum.de/en/index.htm.