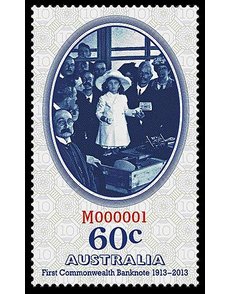 A 60-cent stamp depicts young Judith Denman clutching the new note during the May 1, 1913, ceremony.

Images courtesy of the Perth Mint and Australia Post. 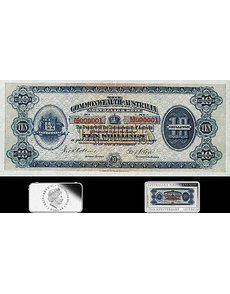 Australia’s first bank note, a 10-shilling note issued in 1913, is celebrated on a new Proof silver dollar from the Perth Mint. The original note is pictured with the coin being issued in its honor.

Images courtesy of Coinworks and the Perth Mint.

Australia’s first bank note, printed a century ago, is now for sale with an asking price of $3.5 million Australian.

On May 1, 1913, 5-year-old Judith Denman turned the handle on a printing press and Australia’s first bank note — denominated 10 shillings — received serial number M000001. Prime Minister Andrew Fisher, the proponent of the Australian note series, gave her the note, which returned to England with her when Lord Denman, her father, stepped down as governor general in 1914.

Cataloged as Virtually Uncirculated, the note has a fine centerfold resulting from its early storage, and not its usage, according to Coinworks, the firm that is attempting to find a buyer.

The announcement of the sale and the asking price, which is equivalent to about $3,587,315 U.S., was made on May 1, the anniversary of the note’s manufacture.

The announcement may have upstaged a new coin and stamp set from the Perth Mint that honors the first bank note.

Released May 10, the set contains a rectangular Proof .999 fine silver dollar with the note in color on the reverse, and the Ian Rank-Broadley effigy of Queen Elizabeth II on the obverse.

A 60-cent stamp in the set shows the recipient of the first note, while a $2.60 note in the set depicts the Australian coat of arms.

A total of 3,000 sets are available. The coin weighs 31.135 grams, and measures 47.6 millimeters wide and 27.6 millimeters tall. Design is credited to Wade Robinson.

Coinworks has created a dedicated website for the first note, www.numberonenote.com.au/, where as noted, the item has a price tag of $3.5 million Australian.

Talisman offers the replica set for a much more affordable $99.95. Shipping and handling require an additional charge.