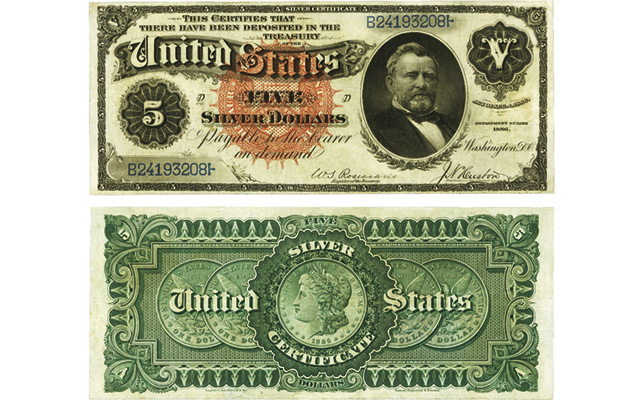 This Series 1886 $5 silver certificate displays a portrait of U.S. Grant on the face and a row of five 1886 Morgan silver dollars on the back.

Editor's note: The following is the first of a three-part Coin World series about collecting paper money featuring coin designs found on paper money, prepared by Michele Orzano for the January 2015 monthly edition of Coin World.

Trying to decide whether to collect coins or paper money? Why not enjoy a little of both, with a single numismatic collectible theme — paper money depicting coins.

Series 1886 and 1891 $5 silver certificates have some beautiful examples of engraved portraits and flourishes common for that era.

The face side of the notes of both series bears a portrait of Ulysses S. Grant engraved by Lorenzo Hatch, along with many engraving flourishes.

The back design displays a horizontal row of five 1886 Morgan silver dollars. Four of the coin images display the reverse design of the coins, while the fifth image displays the “face” of Liberty. The use of five silver dollar conveys the denomination in a way that just using numerals could not do.

While someone might consider this to be the first “use” of the “In God We Trust” motto on paper money, because it can be read on the reverse of the Morgan dollar, it really isn’t.

In actuality, the printing of the motto on paper money (not as part of a coin design) didn’t happen until 1957.