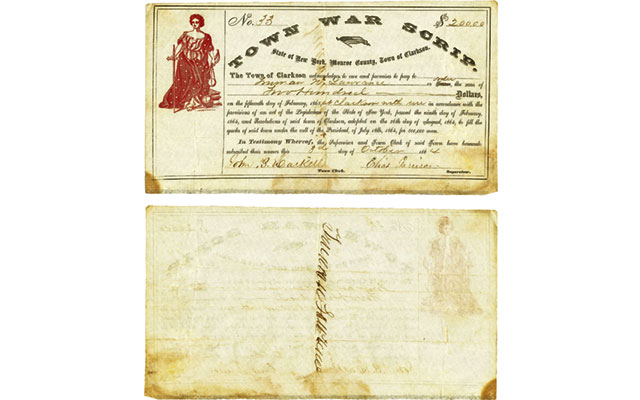 The scrip note was graded Very Fine by the auction firm and described as having a bit of “paper aging around the margins.”

The piece entitled the recipient, Truman N. Lawrence, to $200 that the town would pay upon its redemption on Feb. 15, 1865. The scrip was issued upon Lawrence’s voluntary enlistment in the Union Army to “fill the quota of said town under the call of the President, of July 18th, 1864, for 500,000 men.”

The scrip note is a fascinating bit of history by itself, but the additional fact that the note was endorsed by Lawrence on the back means he survived his service during the Civil War, not a claim every solider could make following the bloody war.

Lawrence is listed in the 1869 business directory for Monroe County, New York, as a farmer in East Clarkson, N.Y., who farmed 160 acres.

For more information about the auction, visit Heritage's website.