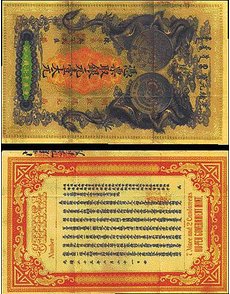 The reader submitted what he called “two notes.” A specialist in Asian paper money suggested the two pieces are uniface replicas of the face and back of a Chinese note.

Here are copies of two notes that I have had since 1986.

Any direction you can give me would be helpful.

Although the reader refers to “two notes,” the color copies the reader sent show what appear to be two uniface, individual face and back designs of a single, vertically oriented, large-format note. One side of the note depicts two dragons, each holding a coin. One dragon holds the obverse of a Chinese Hu-peh silver dollar, often referred to as a “Dragon dollar”; the other dragon holds the reverse of the coin. The coin also is denominated 7 mace and 2 candareens. The other side of the note shows several columns of Chinese characters in the center of the note with the inscription CHINA/NUMBER above and 7 MACE AND 2 CANDAREENS/HU-PEH GOVERNMENT MINT below.

The copies the reader sent to Coin World were scanned and the scans sent to Joe Boling, an expert in Asian paper money.

Boling said, “My conclusion is that it is a replica.” He said if the note was genuine, it should be intaglio printed, a process that uses a deeply engraved printing plate and leaves a unique embossed look and feel on the paper.

Boling said he couldn’t tell from the scan what technology was used in the printing, “but I don’t believe the note is original.”

A genuine example is on display at the British Museum website, www.britishmuseum.org/explore/highlights/highlight_objects/cm/s/silver_dollar_note_issued_by_t.aspx.

The dragons depicted on the note are symbols of the emperor while the coin denomination of 7 mace and 2 candareens is also the denomination of the note. According to the museum website, the Chinese inscription down the center of the face of the note translates to “With this note collect one silver dollar.”

The museum example was issued by the Hu-peh Government Mint in the city of Wuchang in an effort to relieve an extreme shortage of standard cash in this area of China. The notes could be used for all official payments including taxes.

The notes could be redeemed at the Wuhan Government Monetary Office, according to the museum website.