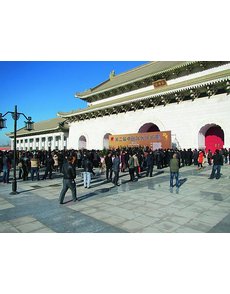 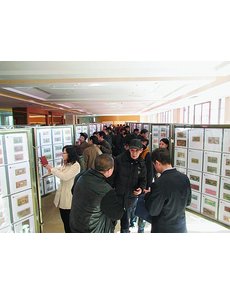 My wife, Katherina Minardo, and I traveled about 18 hours to attend the 2nd China Paper Money Exhibition in the Tianjin suburb of Baodi, Nov. 24 to 26, 2013.

Nearly 5,000 Chinese notes in 200 cases belonging to nearly 171 collectors in China were on display during the exhibition.

Liu Jihui, a leading Chinese collector who lives in Baodi, was the chairman of the exhibition, held at the Jade Palace Exhibition Hall at least an hour from downtown Tianjin, which is located in northeast China.

All the expenses of the event, including more than 100 hotel rooms, were absorbed personally by Mr. Liu. Without the generosity and effort of Mr. Liu, the 1st China Paper Money Exhibition (which took place in Beijing in 2009) would still be the first and only.

Alex Fung Ngai Chuan of Hong Kong and Shenzhen was the principal coordinator of the exhibition. In the past he has attended International Paper Money Shows in Memphis, Tenn.

Camaraderie was the major benefit of this event; the bank notes themselves were simply the draw that pulled us all together.

The VIP opening ceremony on Nov. 24 welcomed museum curators and staffers as well as local politicians. At a dinner later than afternoon we met a Japanese dealer, Mr. Sugaya, who has just published a limited edition work on the coinage of Manchuria or Manchukuo. It is very detailed, gives prices, and for anybody interested in the series, it is a must-have. I saw numerous pieces in it that I had not known about previously. (Joe Boling, you absolutely need a copy.)

Mr. Sugaya, accompanied by his wife/translator, was as far as I know the only attendee from Japan. He and I had met decades ago.

A rather healthy crowd attended the opening ceremonies. Alex asked me how many I thought were outside. My guess was at least 300. He felt 400 or 500. Certainly too many to count.

After speeches by the mayor and others outside the hall (despite the stiff north China plains breeze and temperatures not much above freezing), the crowd descended on the exhibition hall. I have to say I have never seen a crowd like that viewing bank notes or coins on exhibit at any show anywhere, including the American Numismatic Association’s conventions.

Dinner was followed by an organizational meeting discussing how to organize for the future. My translator Alex had been preoccupied with other matters and did not arrive until late. I have no clue as to what each and every person in the room (were there 100 of us?) was saying in turn, and everyone but me was listening.

The room was baking hot, and with jet lag I drifted off several times before deciding that if I snuck out early it would go unnoticed. However, to my surprise, I found myself headed off at the pass. As the only Westerner, my opinions were solicited, and it was made quite clear that the only place for me was at the negotiating table. That woke me up in a hurry, and I asked Alex for a hasty briefing on exactly what was being discussed, on which my considered advice might have some impact.

Four 90-second speakers later, it was my turn. Alex and I each had a microphone, and to my relief it went very smoothly. Alex is an excellent instant translator. I went through the various pros and cons of keeping the show organization (or nonorganization) fluid and adaptable, versus the main alternate choice of in some ways being brought under government sponsorship. As there was a nice round of applause I have to presume that either (A) people appreciated what I had to say; or (B) Alex sugar-coated everything with a view to locking in major contributions from the West in the future!

Then there was more talk, in the lobby, with major collector Aguang Chan of Macao, who came with his wife, Lee, and others. We managed effortlessly to hammer out the rudiments of a bank note and money exhibition for Macao, possibly to be sponsored by a major Chinese institution. Also discussed was the possibility to have Katherina’s major sculptural work The Guardian on display in Macao at the same time.

The following day the crowd thinned considerably; many people had headed home overnight. Then we departed after thanking Mr. Liu. We were driven into Tianjin by his bilingual niece, Liu Congying.

In Tianjin, we met with the directors of both the Tianjin Art Museum and the Financial History Museum. We spent the following three days scouting out potential sponsors for proposed exhibitions at the Tianjin Museum and Tianjin Art Museum. We had encouraging results at a major and highly progressive Chinese bank, and a surprisingly long meeting with the director of both Tianjin museums. If readers would like to hear, we will provide updates on these projects as they may develop.

William Barrett is a paper money collector from Montreal, Canada.