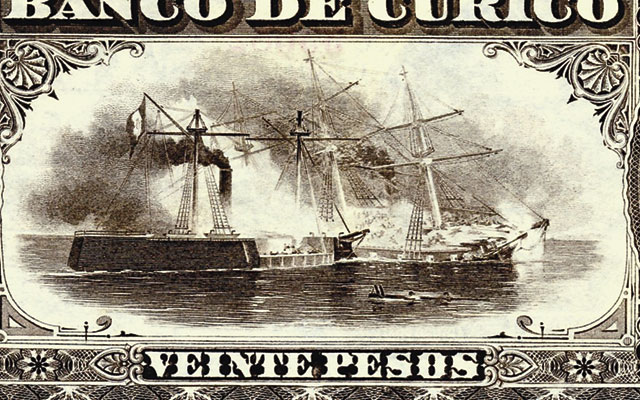 A closeup of the back design for an 1882 20-pesos note issued by private El Banco de Curico in Chile depicts the Battle of Iquique on May 21, 1879 between Chile and Peru. 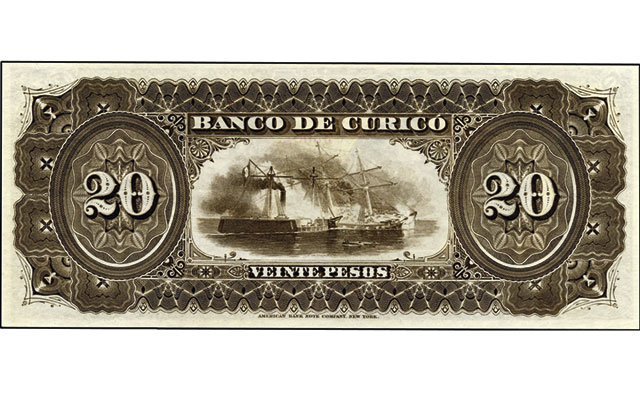 The back design for an 1882 20-pesos note issued by private El Banco de Curico in Chile depicts the Battle of Iquique on May 21, 1879 between Chile and Peru.

As readers of this column know, I have quite varied collecting interests and always seem to be adding new areas to my collection.

Among recent addition to my collections is world paper money printed by the venerable American Bank Note Co., particularly pieces issued before 1900.

I recently acquired a pretty Chilean note issued by the private Banco de Curico. The private bank was similar to state banks in the United States.

What attracted me to the note was the unusual vignette on the back that depicts two naval vessels engaged in close combat, with one on the verge of sinking.

Naval vessels? Combat? It was time to do a little research.

The portrait on the face of the note obligingly was captioned EL CAPITAN DE IQUIQUE ARTURO PRAT. A quick trip to the Internet quickly filled in the blanks.

As it turns out, Prat was a Chilean naval officer whose last command before his death in combat was the Esmeralda, a wooden hull, steam-powered corvette.

The Esmeralda was ultimately sunk by the Peruvian ironclad Huascar in the Battle of Iquique on May 21, 1879, during the War of the Pacific.

That very naval confrontation is depicted on the back of the note!

The War of the Pacific was fought between Chile and Peru, which was allied with Bolivia, between 1879 and 1884 over various territorial disputes.

Ultimately Chile won the war and Capt. Prat was acclaimed a Chilean national hero due, in part, to his heroic actions, leading a boarding party onto the attacking Peruvian vessel.

The Huascar is still around; one of the few early ironclad era warships to survive. The vessel is maintained by the Chilean navy as a memorial ship in the port of Talcahuano, Chile, honoring the bravery of both the Chilean and Peruvian naval forces.

Knowing this helps to clear away the confusion that I originally had when I was wondering why a Chilean note would honor a naval battle that had been won by the enemy.

It appears that the loss of the Esmeralda and the heroic death of its commander, Capt. Arturo Prat, served as a rallying point for the Chilean people. It’s similar to what went through the minds of Americans when they heard the slogans, “Remember the Maine!” or “Remember Pearl Harbor!”