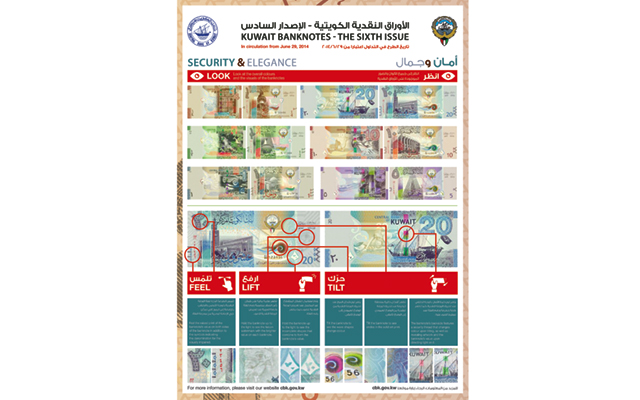 An information poster explains the new security features on the sixth series of Kuwait bank notes, released into circulation June 29.

Image courtesy of the Central Bank of Kuwait.

Officials of the Central Bank of Kuwait report the June 29 launch into circulation of redesigned Kuwait bank notes went smoothly.

The six denominations of notes of the sixth series display sophisticated anti-counterfeiting devices including a falcon watermark; optically variable inks and images that appear to move when the notes are tilted; and fluorescent elements and raised print to help the visually impaired identify the denomination.

“Every new banknote has a unique background design that is inspired from Islamic art, an element that asserts a sense of originality and familiarity, both of which further the new banknotes’ aesthetically pleasing design and innovation,” according to an informational brochure issued by the bank.

Each note’s theme dictates its color. For example, the 20-dinar note’s color is blue because the featured theme includes elements of Kuwait’s marine life.

The redesigned bank notes, printed by De La Rue, will co-circulate with the older, fifth issue, notes until the older notes are removed from circulation.

For more information about the new bank notes, visit the bank’s website.