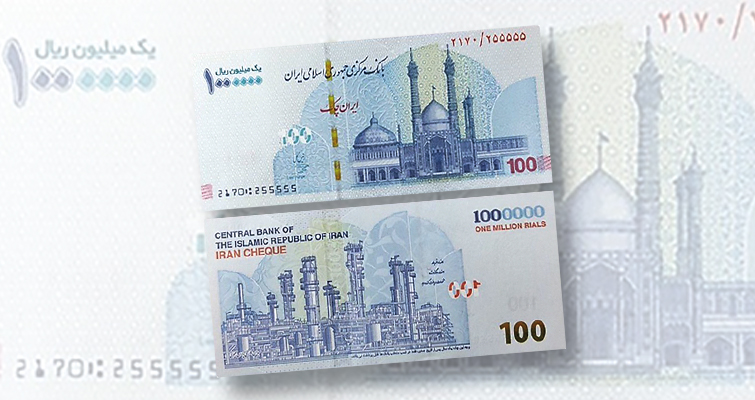 As inflation and sanctions continue to decimate Iran’s economy, the Central Bank of Iran put what it refers to as a 1-million-rial “cheque” into circulation on Sept. 12.

Images courtesy of the Central Bank of Iran via Twitter.

As inflation and sanctions continue to decimate Iran’s economy, the Central Bank of Iran, or Bank Markazi, put what it refers to as a 1-million-rial “cheque” into circulation on Sept. 12.

It continues the practice begun in 2021 on the 10,000-, 20,000- , and 50,000-rial notes, of printing four zeroes in a lighter shade of ink than the other numbers in the denomination. This is to reflect the transition from rials to a new toman denomination, which removes the four zeroes; the shading shows that 1 million of the old rials is the equivalent of 100 new tomans. This is already done in commerce on an informal basis.

Although the cheque is considered an emergency currency and is not actually legal tender, it and other values in the series circulate.

A million rials is worth a little more than $4 U.S. at the official exchange rate.

The new piece succeeds one of the same value but different design. Before the Central Bank of Iran’s website was taken down on Sept. 21, purportedly by hackers in protest over the death of a young woman in police custody for alleged immodest dress, the bank said that the additional features made it more secure against forgeries.

The 156-millimeter by 71-millimeter note is of paper with embedded fluorescent fibers.

The face design is dominated by the Fatima Masumeh sanctuary in Qom, a holy city in Shi’a Islam and one of the two most sacred in Iran. All text is in Farsi, including a red serial number in Farsi numerals. A blue serial number in western numerals is at the lower left. The number 100 is in red at the lower right without the four extra zeroes.

The processing plant at the South Pars natural gas field, called by far the world’s largest, and shared by Iran and Qatar, is depicted on the back. This is captioned in Farsi, but the rest of the text is in English. The denomination 100 is at the lower right with the dual denomination above it on the top.

The security features are sophisticated for something not considered legal tender. They include a windowed security thread that changes from gold to green, and on the face, serial numbers printed with fluorescent ink that turns gold and light blue under ultraviolet light, a watermark, and microprinting. On the back, the number 100 is printed in magnetic optically variable ink that changes color and conveys movement. The number 100 is also used as a registration device on the two sides.

Iran’s various new notes are the result of a decision in May by Iran’s parliament to slash zeroes off each value to make it easier for consumers to carry cash, calculate prices, and make payments.

Furthermore, over the next two to five years, the rials will be withdrawn from circulation entirely and replaced with a new toman, wherein one toman will be equal to 10,000 rials. This explains why the zeroes on the new notes are printed in a lighter color.

The arrangement is actually nothing new to Iranians, who long ago knocked off the zeroes themselves and stopped calculating prices in rials. Instead, even though they used the physical rials as currency, prices were quoted in tomans. At present, for example, one toman equals 10 rials. 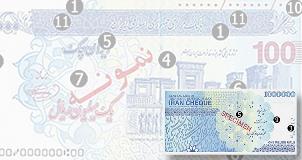 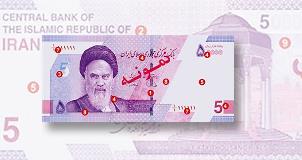 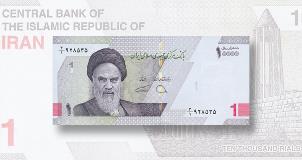