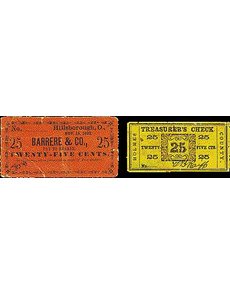 Most issuers who selected cardboard for their emergency small change scrip probably did so because they believed cardboard pieces like the ones shown had a longer circulation life than paper and were cheaper than metal tokens.

Most of us know the basic history of “emergency money” that was issued in both the United States and the Confederacy near the beginning of the Civil War.

As it became obvious that the war was going to be a prolonged struggle, the nation underwent its greatest currency crisis since the Panic of 1837, also a period of economic and political uncertainty. As occurred during the earlier panic, coins during the Civil War, even the humble cent, started to disappear from circulation in 1861 and 1862.

In reaction to this widespread hoarding (one popular story of the time suggested that the second floor of a warehouse collapsed under the weight of kegs of cents being stored there), substitutes were quickly devised and thrown into the breach. Some of the first humble attempts involved circulating uncanceled postage stamps in order to make change.

Post offices across the nation quickly ran out of stamps while at the same time refusing to redeem sticky dirty piles of stuck together stamps when the more aggressive segments of the population tried to redeem them for more traditional forms of cash.

The next step was putting stamps in envelopes of various “denominations,” which was OK until the more larcenous segments of the population “shorted” the stamps in the envelopes (putting, for example, only 35 cents worth of stamps in a 50-cent envelope, passing it, and pocketing the 15-cent profit).

Salmon P. Chase is credited with inventing postage and fractional currency, which were small notes that initially had pictures of stamps on them. Ultimately these federal fractional notes broke the small change shortage by about 1863 to 1864.

The private sector also offered several alternatives such as the short-lived encased postage stamps, which featured a postage stamp in a brass shell with a mica window so that the stamp could be seen but remained protected.

By far, the two most popular alternatives were small copper tokens, the size of the then current Indian Head cent, and private paper scrip issued by thousands of local merchants, businesses and municipalities. The Civil War tokens were composed of two types — patriotic and store card types. The former contained patriotic images and slogans but were issued anonymously. The latter were issued by various businesses and contained information about the issuer as part of their design.

I’ve always enjoyed the paper scrip notes; little scraps of printed paper serving as IOUs for countless issuers. But far rarer are the scrip issues that utilized cardboard rather than either metal or paper. Most of cardboard scrip issues are relatively small and without much ornamentation but I really like them.

Most issuers who selected cardboard probably did so because they believed it had a longer circulation life than paper and was cheaper than metal tokens.

A lot of the surviving cardboard scrip shows signs of circulation like rounded corners, soiling and creases. It shows that these little scraps of cardboard could really “take it.” Next time you run into one of these, consider the odds against its survival, and give it a good retirement home in your collection!