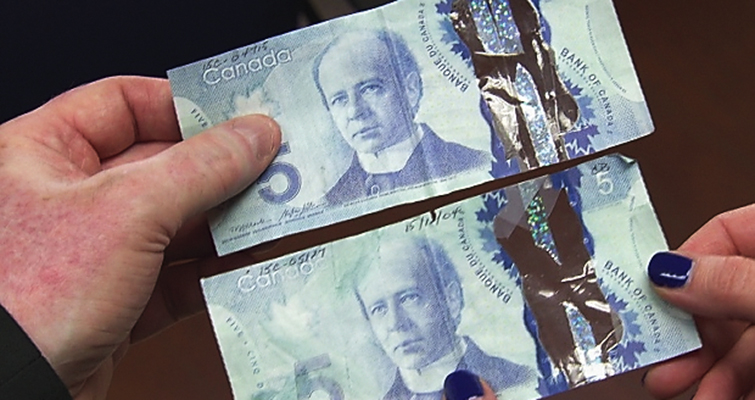 Self-congratulatory comments by the Bank of Canada about the safety and security of its new polymer bank notes may need to be scaled back, at least according to a May 16 report by CTV News.

Concerns have been raised about altered $5 bills that are held together by strips of tape, with foil inserted in place of the hologram. What happened to these important anti-counterfeiting features present on the notes in their original form? Investigators think that the clear panel at the side of the note and the two holographic strips are being mined to make higher-denomination counterfeits: The tape replaces the clear window and the foil replaces the holograms, while the real elements are then used on fake notes of higher value.

The result is what Josh Elliott of CTV calls “two Frankenstein-like sets of bills, with each containing elements of real and fake banknotes.” The problem is nationwide and a link to organized crime is suspected.

The best way to avoid accepting a Frankenstein, authorities say, is to know your notes and check more than one security feature. Holograms on the $5 bill have Sir Wilfrid Laurier’s portrait at the top of the clear panel, and Parliament’s Mackenzie Tower at the bottom. Small 5s are written across the face and back of the panel. The holograms on the other bills are different — Sir John A. Macdonald ($10), Queen Elizabeth II ($20), William Lyon Mackenzie King ($50), and Sir Robert Borden ($100) in the holograms, and different structures from Parliament Hill in Ottawa along the bottom. Other security devices, such as the microprinting, also differ by denomination. 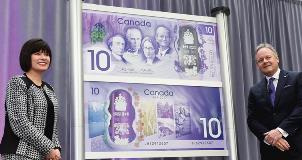