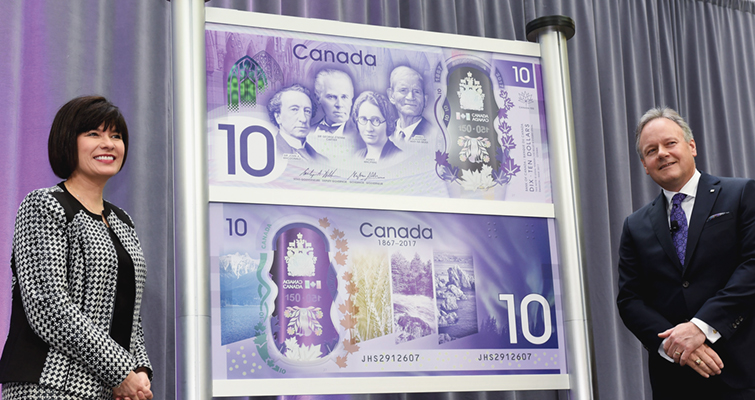 Ginette Petitpas Taylor, parliamentary secretary to the Minister of Finance, and Stephen S. Poloz, governor of the Bank of Canada, on April 7 unveiled the commemorative bank note celebrating Canada’s 150th anniversary of Confederation at the Bank of Canada’s head office in Ottawa.

The fourth commemorative bank note in Canada’s history, a polymer $10 note celebrating the 150th anniversary of Confederation, was revealed in a ceremony at the Bank of Canada in Ottawa on April 7.

The note is designed to showcase Canada’s history, land and culture. Bank Governor Stephen Poloz added: “This bank note is intended to captivate our imagination and instill pride in what we, as a nation, have accomplished. It celebrates the natural beauty and majesty of our land and some of the important parliamentarians who helped shape our great country.”

The Bank of Canada called attention to the note’s intricate design and unique qualities. For the first time, four people are depicted on the face of a Canadian note: Sir John A. Macdonald, Sir George-Étienne Cartier, Agnes Macphail, and James Gladstone (or Akay-na-muka — his Blackfoot name). Their busts are shown in front of Parliament’s Hall of Honour, to symbolize that Canada has been shaped by the vision, courage and effort of people of different backgrounds.

The $10 note enters circulation June 1 carrying the first appearance each of a Canadian woman and an indigenous Canadian as Bank of Canada note portrait subjects. The design also incorporates Inuit and Metis cultural elements: in the window is a reproduction of the artwork Owl’s Bouquet by Inuit artist Kenojuak Ashevak; and the borders have an arrow sash pattern that is an important symbol of the Métis nation.

The back shows five different landscapes from various regions, meant to illustrate Canada’s natural beauty and unique scenery: the Lions/Twin Sisters of Western Canada, a wheat field of the Prairie provinces, the Canadian Shield representing central Canada, Cape Bonavista in eastern Canada, and the Northern Lights in northern Canada.

The note also has new security features, including a color-shifting representation of an arch found in the Memorial Chamber on Parliament Hill and three-dimensional maple leaves.

Forty million Canada 150 $10 notes will be issued; the notes should be widely available nationwide within a month of their release. They will circulate alongside the current polymer $10 note but do not replace it. The two notes can be used interchangeably in transactions.

A new regular-issue $10 note will be issued in late 2018 featuring the human rights icon Viola Desmond. Her portrait will be the first portrayal of a Canadian woman on a regularly circulating Bank of Canada note.

Canada’s first commemorative note was issued in 1935 to celebrate the Silver Jubilee of King George V; the second, issued in 1967, marked the centennial of Confederation; and the third, in 2015, commemorated Queen Elizabeth II becoming the longest-reigning sovereign in Canada’s modern era.

Images and extensive information on the many security elements of the Canada 150 notes can be obtained by following the links on the Bank of Canada website. 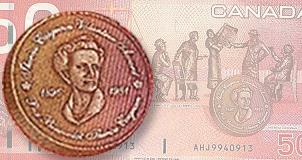