Cambists were a bank tellers helper 160 years ago 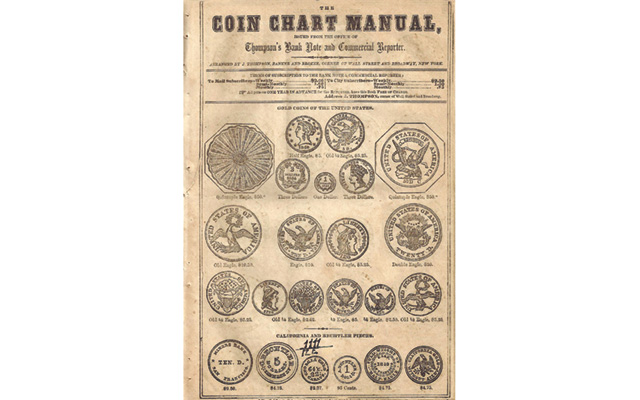 Cashiers and tellers today have an easy time handling cash. That cash comes in the form of five different U.S. coins or six denominations of Federal Reserve notes. Cashiers 160 years ago, however, had an infinitely tougher job.

Thirteen different American federal coins, from the copper half cent through the gold double eagle, were in circulation, and American coins were just the beginning. Coins from other nations were apt to be spent, and some, like the Spanish silver dollar, enjoyed legal tender status.

No Federal Reserve notes existed in 1855, but a bewildering variety of bills in several denominations landed on counters, issued by literally hundreds of banks, from locations in every state, some notes passing at par, others discounted, and many completely worthless.

How could a cashier know which coins and bills were authentic and valuable, and which were counterfeit and valueless?

The answer was a cambist, a book that illustrated genuine coins or notes and alerted readers to known counterfeits so cashiers and tellers could compare the payment offered to the real thing.

Cambists are obsolete in our standardized world, but in the mid-19th century, they were essential to every merchant and bank, and several publishers printed these helpful guides for money-handlers.

Typical of the genre were cambists by J. Thompson, banker and broker, of #2 Wall Street, in New York City. Thompson’s Bank Note and Commercial Reporter was published weekly and covered the paper money scene.

His supplementary annual publication, The Coin Chart Manual focused on depictions of genuine coins for cashiers to compare.

Congress had finally removed legal tender status from foreign coins by the Coinage Act of 1857, but in nearly every community, a profusion of coins from other nations remained in active circulation. Most were from Europe, but some came from unexpected sources, such as Haiti and Turkey. The Coin Chart Manual helpfully illustrated and valued them.

Cambists were printed by the thousands, but since they quickly became obsolete, most were discarded when a new issue was published. Collecting complete sets of publications like Thompson’s is therefore virtually impossible; every survivor is desirable.