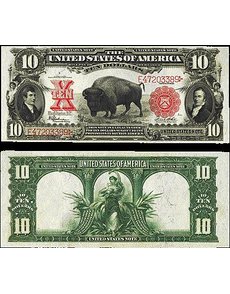 A paper money auction in September offered “something for everyone.”

The Heritage Currency Signature Auction at the Long Beach Coin, Stamp & Sports Collectible Expo in Long Beach, Calif., offered both a different and broader look at the market than the auction at the American Numismatic Association World’s Fair of Money in August.

The ongoing strength of the paper money market was confirmed by the Long Beach sale, where most lots met their reserves and sold.

Paper money is not just a province of the obsessively wealthy. The Heritage Auctions sale in Long Beach showed that a collector can choose a comfortable level of involvement.

The age-old collector adage remains truer than ever: Don’t wait forever to buy the best, but buy the best you can afford.

A great example of this is the Series 1901 $10 United States note, with varieties cataloged as Friedberg 114 to 122. This design is known as a “Bison” note because of the large vignette of a bison on the face of the note, and its popularity is attributable to its iconic design.

This is by no means a rare note. That said, a Paper Money Guaranty Superb Gem Uncirculated 67 example of the F-122 note sold for an impressive $18,800.

Twenty-one other Bison notes were offered in the same auction, eight of them the same F-122 variety.